Hello once again! Sorry for the long delay in updates. Our kiddo is keeping us busy and together with shoots and backlogs, this post came in a little too late.
Anyway to keep things short and sweet, we got our hands on a production model of the Canon EOS-1D X Mark II (will call it 1Dx2 from here onwards for short) as well as the Nikon D5 and we will be pitting it against the original Canon 1Dx which will serve as a control. In case you have a lot of time while browsing this in the toilet, here are the comparison links for Nikon D810 vs Canon 5Dmk3 as well as the pre-production Canon 1Dx2 vs the 1Dx.

A little bit of background here – We got the production Canon 1Dx2 the day it was launched and available for sale in Singapore. The Nikon D5 was not ours however. It was a chance coincidence when we posted on Facebook about the 1Dx2 and our photographer friend Garick responded that he had a D5 with him and was also interested to know the difference in dynamic range. So we met up and did some quick tests with the camera. All 3 cameras are set on the floor with timer shooting mode to reduce camera shake. Remember this is not a Canon/Nikon bashing review because both cameras do have its merits. 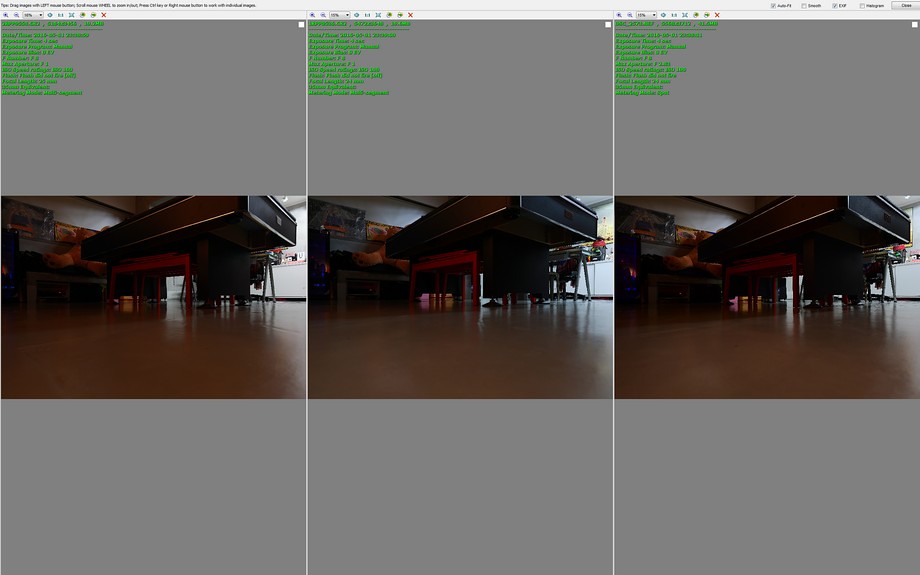 This was shot at ISO 100, F8 at 4 seconds which is about 3 stops under exposed. We loaded all files into ACR and added 4 stops exposure. This is done to test the best possible dynamic range of the sensor which Canon has in history been losing out to Nikon. The following images are the 125% crops of the image that has been added 4 stops. While we as photographers shouldn’t be shooting at 4 stops underexposures, it is still good to know that we can still be able to recover some details lost in the shadows if shit happens or if there is a high contrast scene such as sunrise landscapes etc. 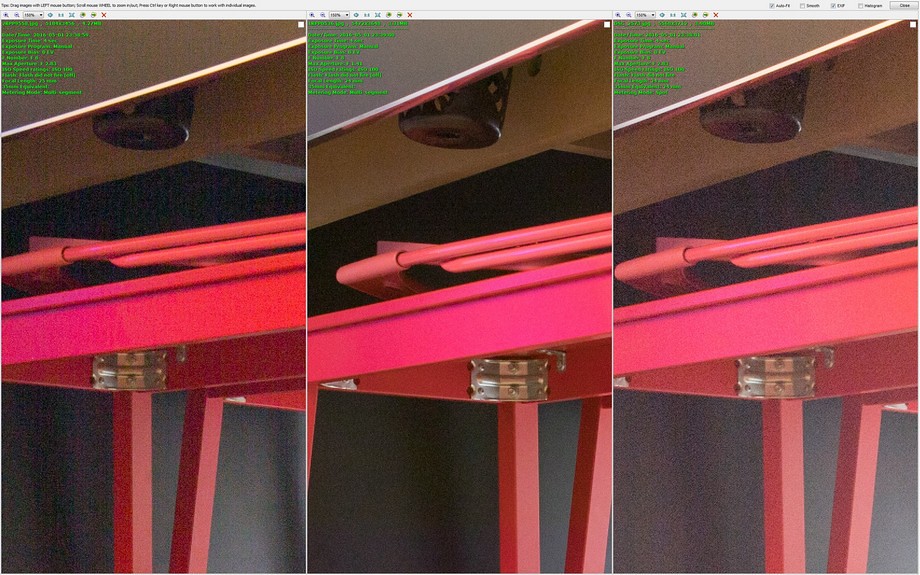 (High res image click Here) – Notice the red/green color noise in the Canon 1Dx as well as the slightly nosier Nikon D5 compared to the Canon 1Dx2. This to me is already a marked improvement and it looks like tides have turned for those at Canon camp! 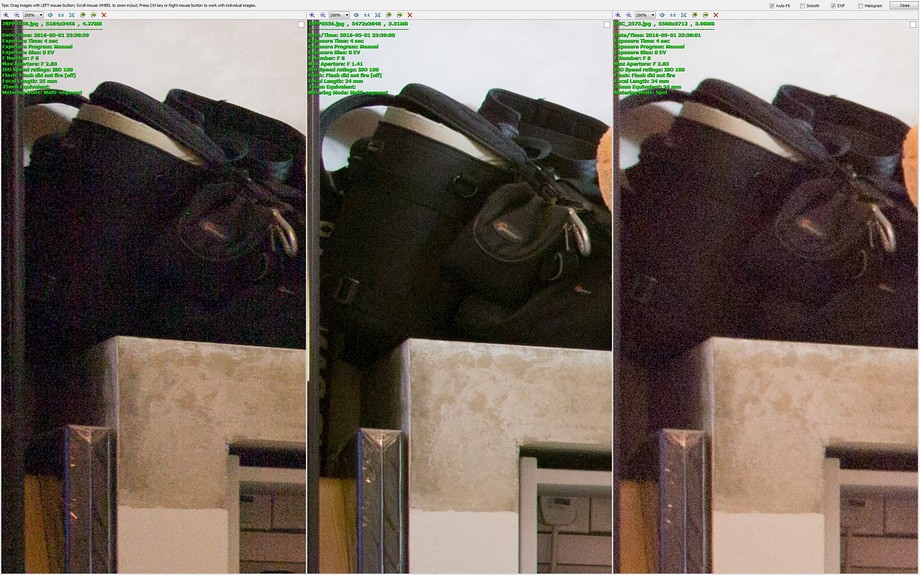 (High res image click Here) – Again the details found in the bag which is missing from the original 1Dx and the noisy D5 compared to relatively clean and still usable 1Dx2. Strange pink color cast also noticed on the D5 and usual red/green color noise noticed on the 1Dx. 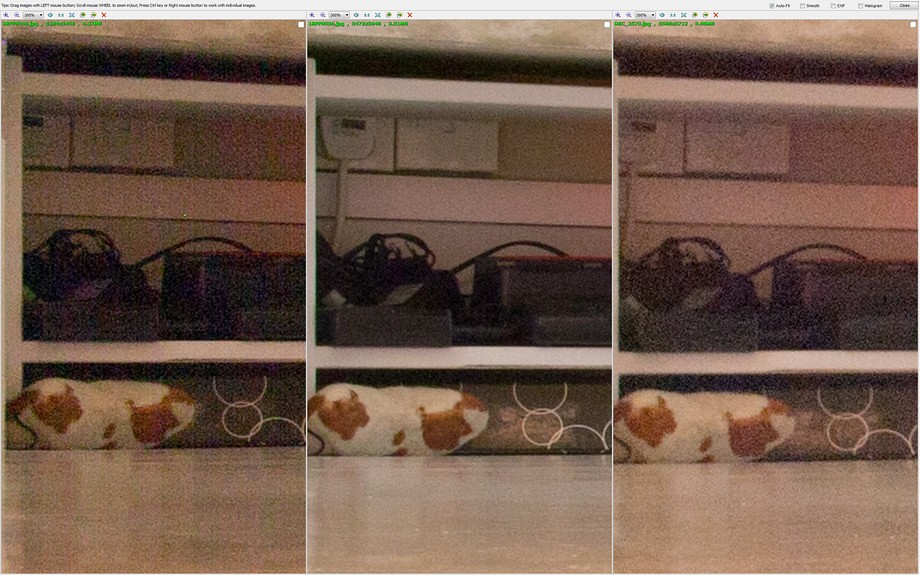 (High res image click Here) – Details in the charging dock as well as the roughly able to make out the details on the power plug. Clean and usable on the 1Dx2. 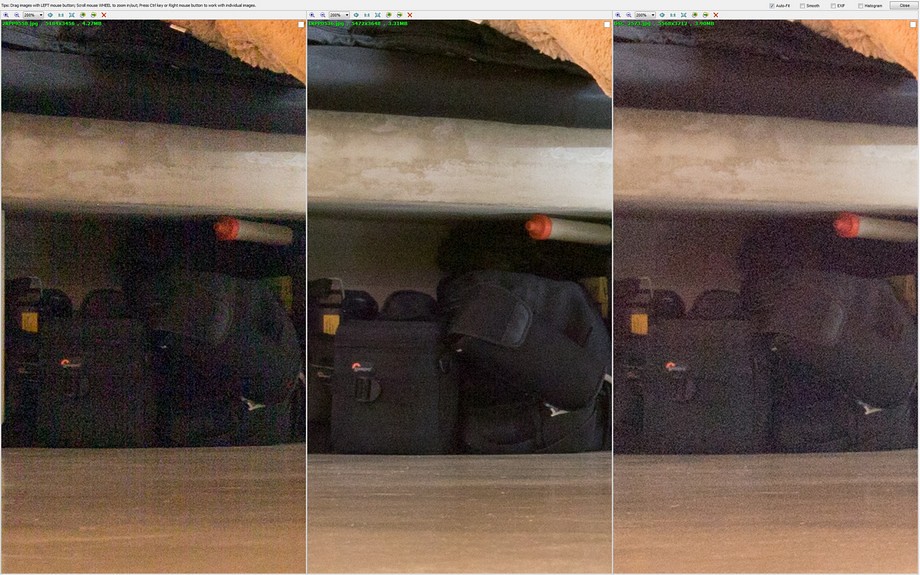 (High res image click Here) – The details that can be found in the pouches area underneath the ledge. Yes I still have a super soaker!!! Remember this was in total darkness in the original raw file and the ability to pull and extract details out of nothing is no mean feat! 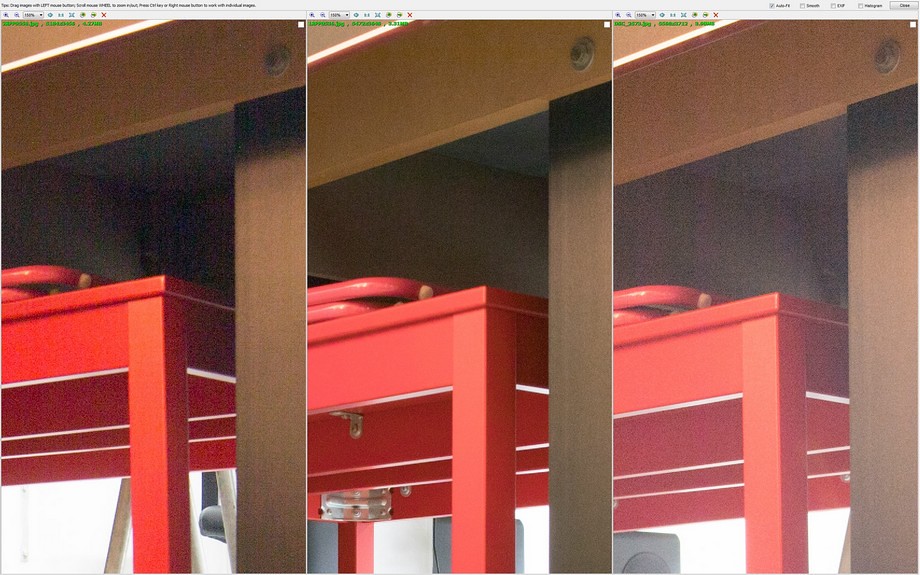 (High res image click Here) – Shadow area under the table and the ability to clearly see where the line ends under the table is really impressive! Canon users rejoice!!!

Since we came so far, we decided to do 6 stops underexposure. The results although not at all pleasing, proved that the 1Dx2 had less noise when added 5 stops in ACR. Original underexposed image and the close up crops to follow. 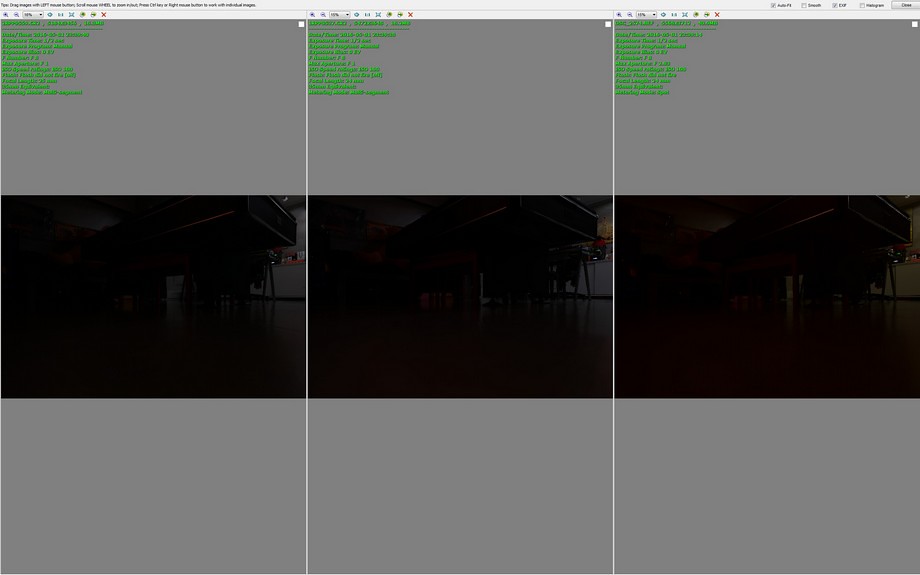 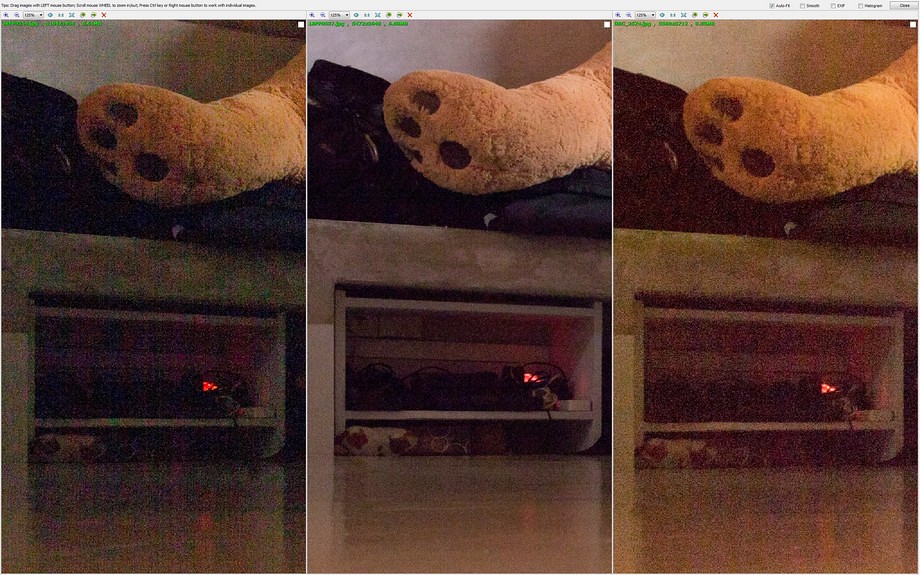 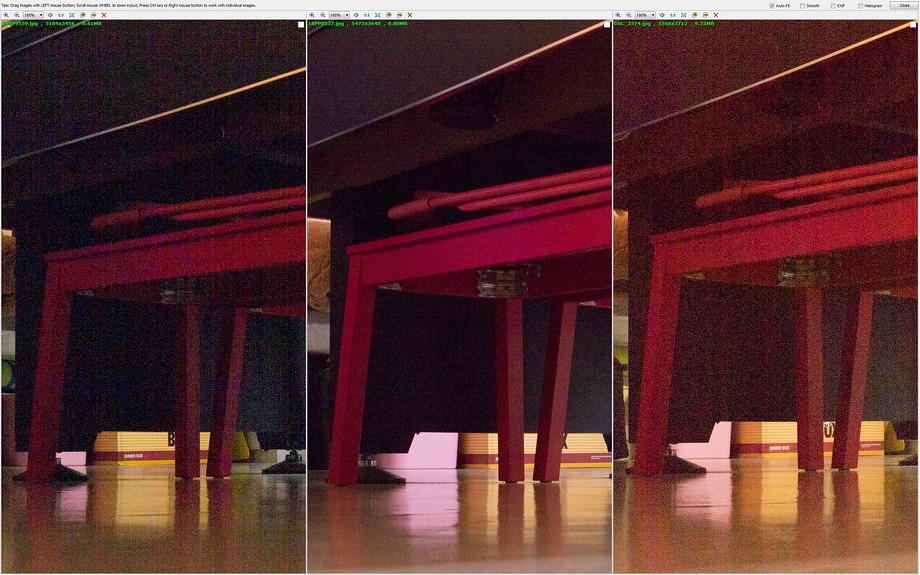 (High res image click Here) – Patchiness and bad red/green color noise on the 1Dx. Same weird pink cast on the D5 and you can barely make out the black cylinder just right under the table. Although noisy, but the 1Dx2 can still get you details when it’s underexposed 6 stops which is pretty amazing! 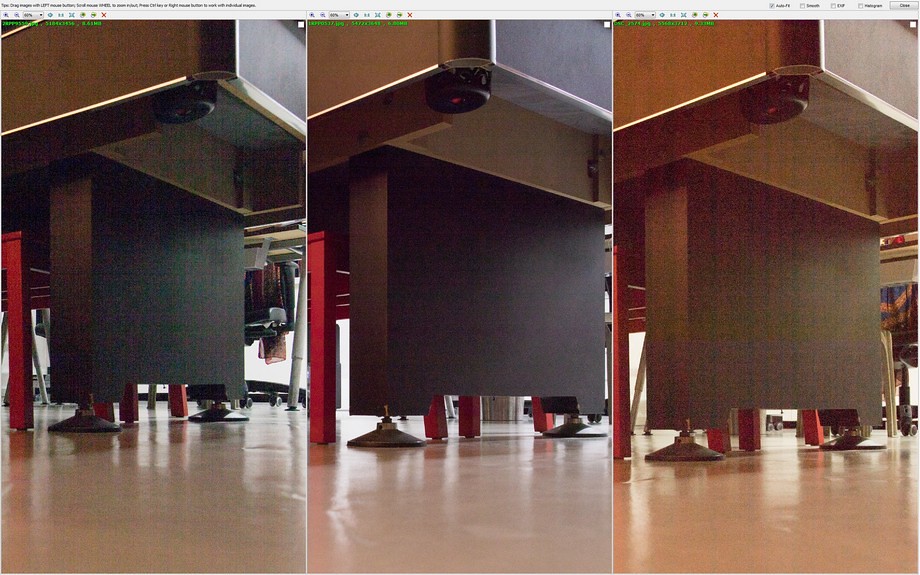 Next we test the high ISO range. Since anything below ISO2500 is relatively clean and usable if you expose the image correctly, we decided to jump straight to ISO3200 and work from there onwards. 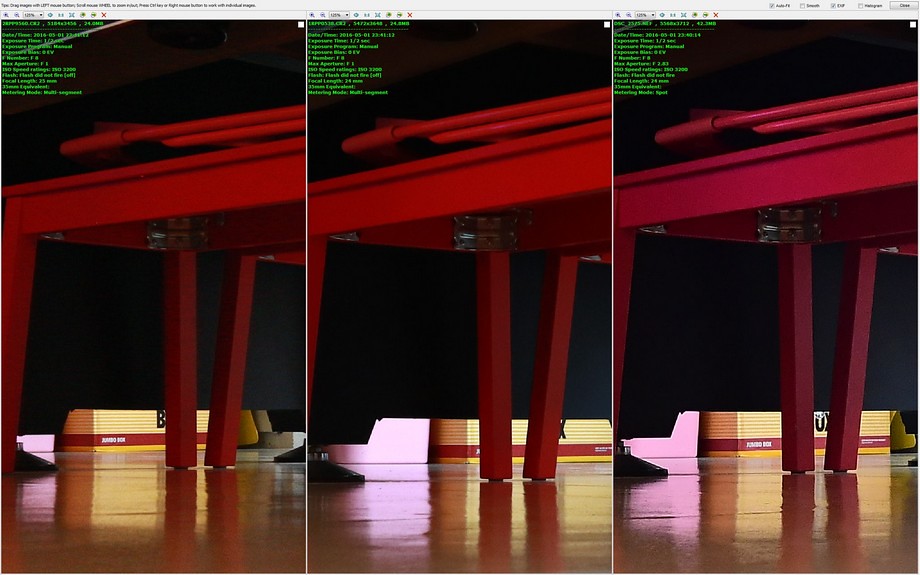 (High res image click Here) – ISO 3200. Patchy and fuzzy on the original 1Dx. Almost similar for the 1Dx2 and D5 although the red chair looks a little magenta on D5. 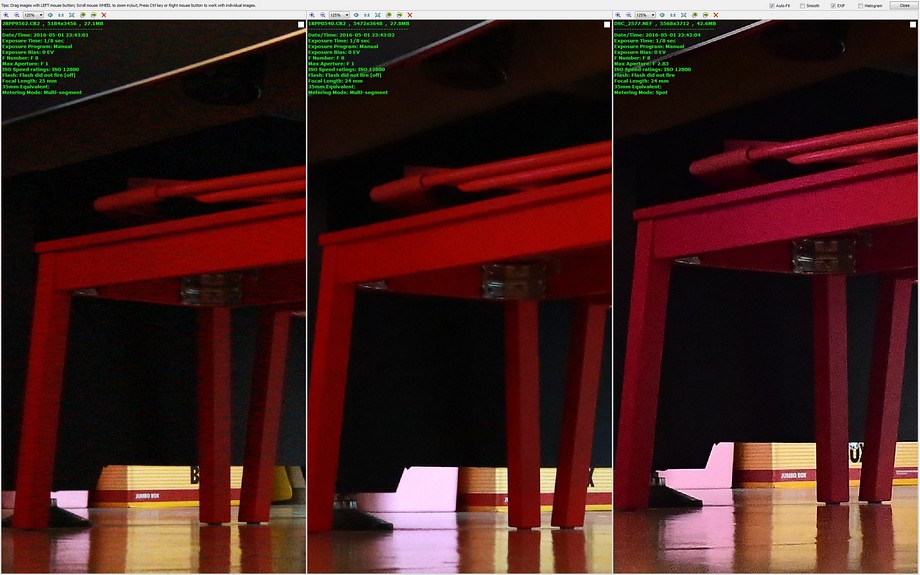 (High res image click Here) – ISO 12800. Patchy for the 1Dx and edges seems to be fuzzy and without details. The metal bracket under the red chair seems to also look sharper on the D5 compared to the 1Dx2. The sharpness on the D5 also seems to be creating jpg artefact lookalike. 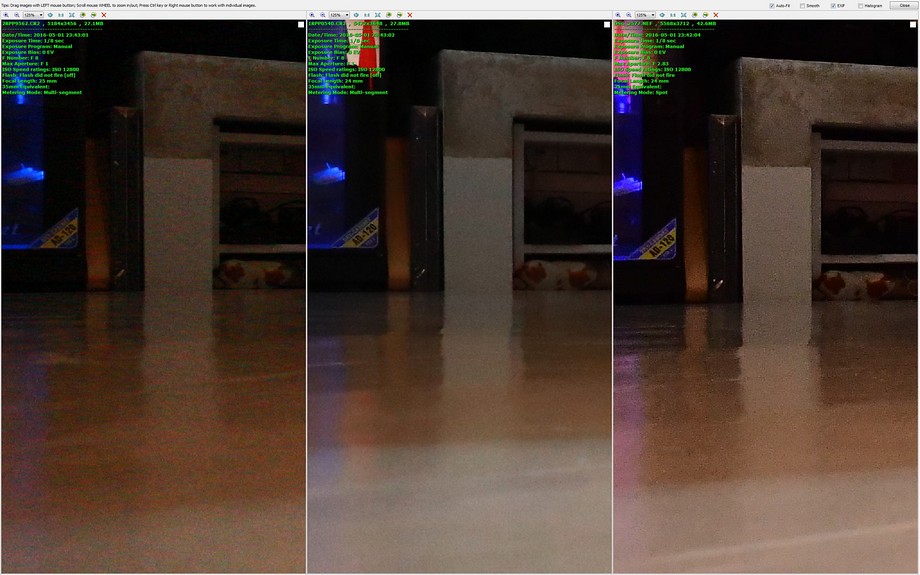 (High res image click Here) – Original 1Dx with red/green noise while the quality is comparable for both 1Dx2 and D5, with only the D5 being sharper, probably due to a sharpening in camera but that produce a weird jpg artefact lookalike. 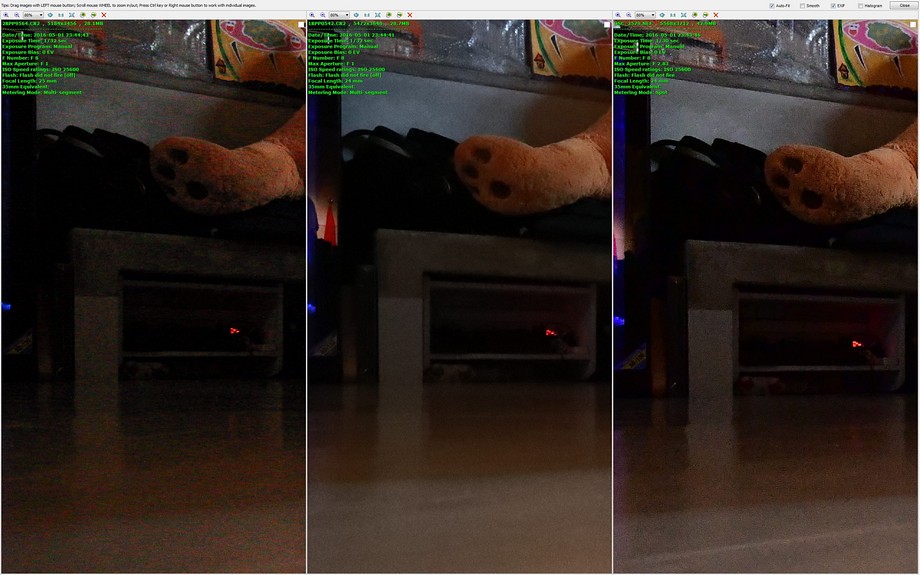 (High res image click Here) – ISO 25600. Up till this point, the ISO of both the D5 and 1Dx2 is really comparable. Without actual data from DXO mark, we won’t be able to tell at which point the D5 surpasses the 1Dx2 but based on what I see, the D5 results become better after ISO 25600. Image is also clearly sharper with the D5 RAW file, no idea if it’s because of the in camera sharpening. But I would rather having it blur and adding unsharp mask to sharpen things up than to have D5 sharpness that creates artefacts that cannot be undone. 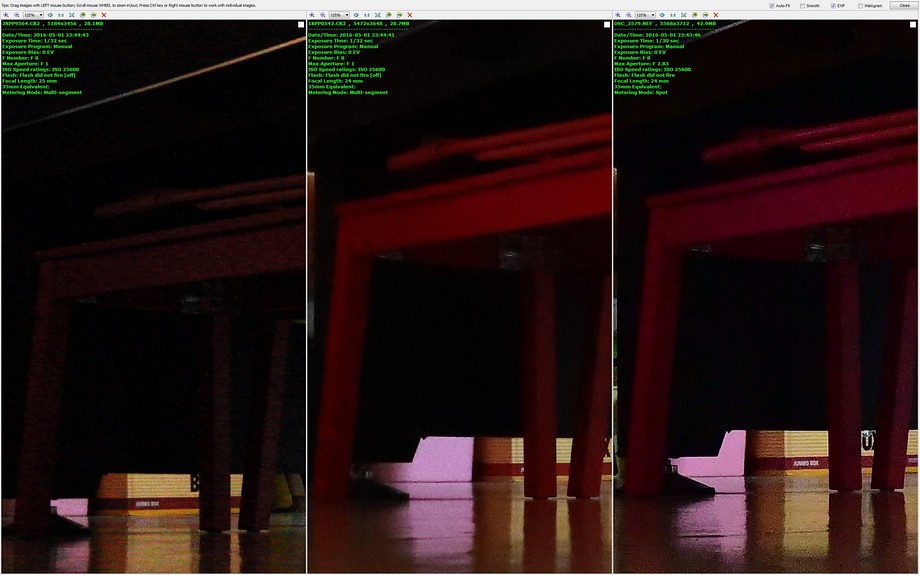 (High res image click Here) – ISO 25600. At the same camera settings, you cannot see much of the details in the chair anymore. However its comparable fuzziness level with the 1Dx2 and D5 with the D5 still being sharper. 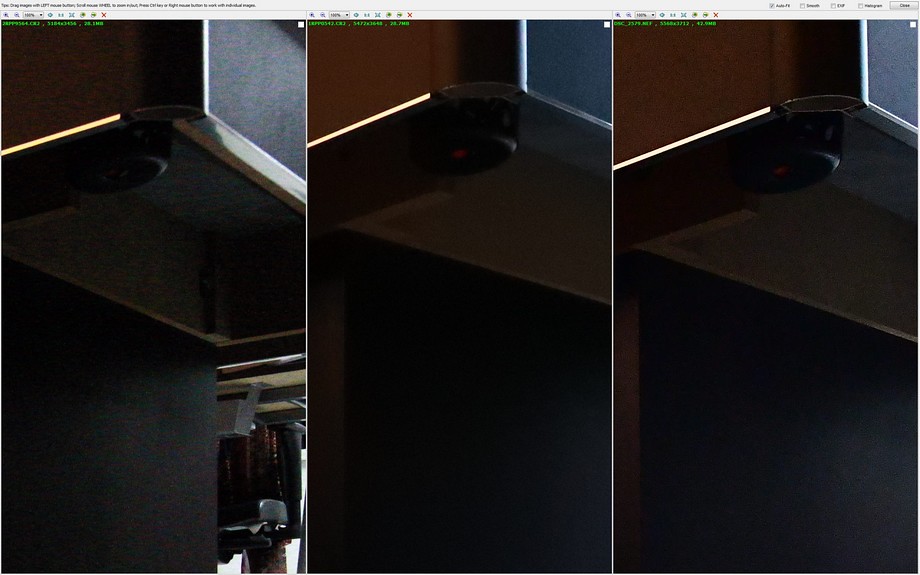 (High res image click Here) – ISO 25600. 1Dx with color noise in shadow areas while the 1Dx2 and D5 noise are both pretty much comparable except the added sharpness of the D5 at the expense of artefacts. 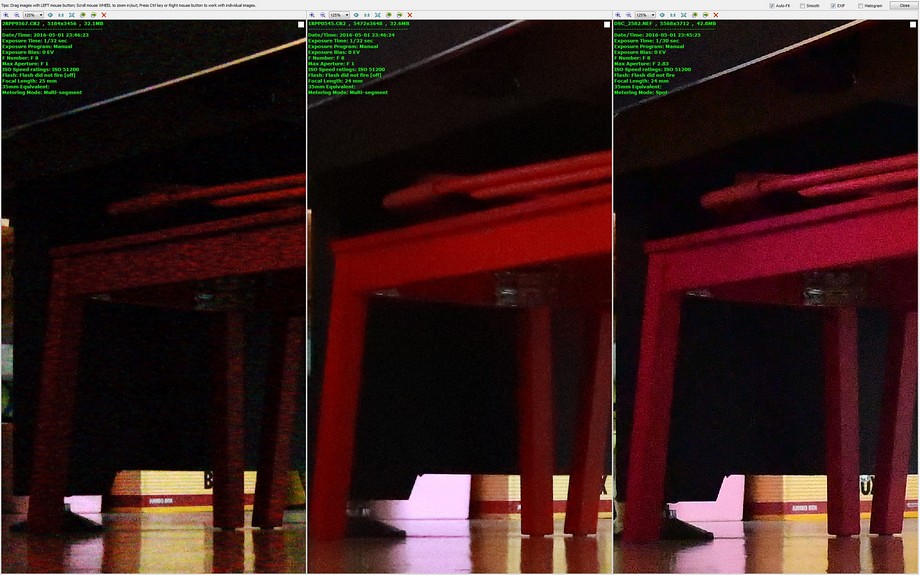 (High res image click Here) – ISO 51200. Things begin to change once they hit ISO51200. Original 1Dx is beyond reasonable use by now and while I won’t use it for my shoots, it is good to know the camera is capable to have ISO 51200 at your disposable. As like before there are strange sharpening artefacts on the D5 images but the edges are not fuzzy like the 1Dx2. I feel somewhere at this ISO is where the D5 took over the lead and from here onwards, the D5 images are better. 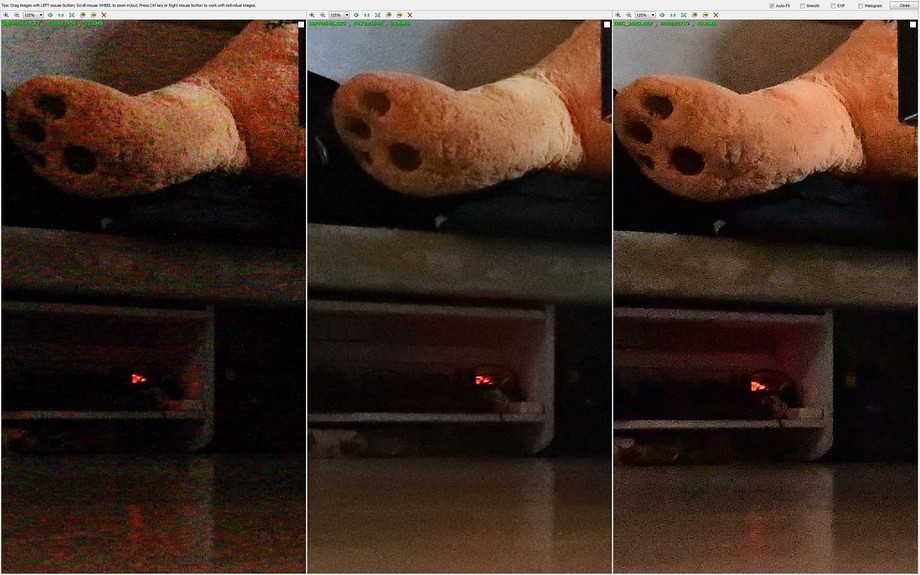 (High res image click Here) – ISO 51200. 1Dx unusable. D5 having the slight edge over in sharpness but with the added artefacts. 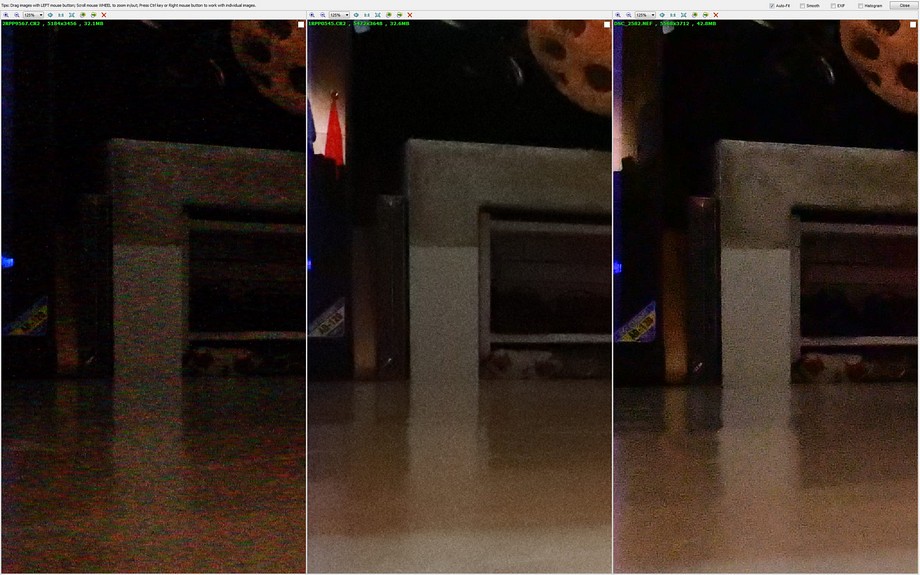 (High res image click Here) – ISO 51200. Similar as to above. D5 having the slight edge over in sharpness but with the added artefacts. 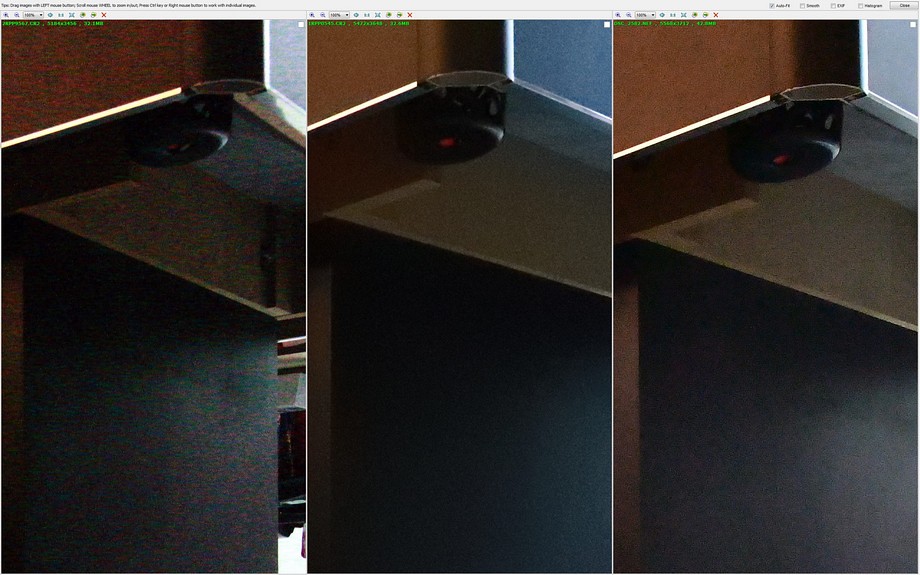 (High res image click Here) – ISO 51200. 1Dx unusable with patchy red/green noise. 1Dx2 have the slight edge here with nice gradual tonality in the black area while the D5 is patchy with the gradient. Noise is comparable except the fact that it is sharper on the D5 which creates jpg artefact lookalike. 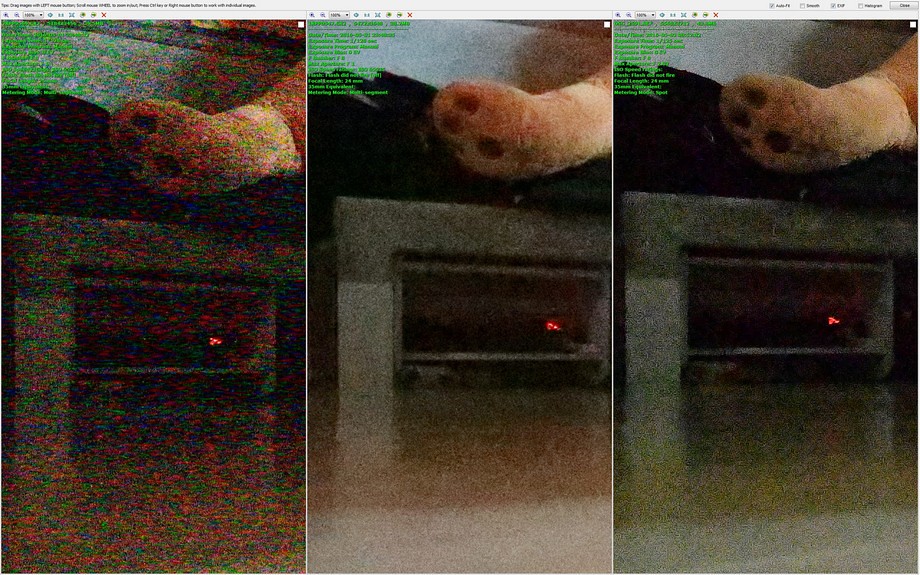 (High res image click Here) – ISO205000. Yes you saw right. It’s ISO 200k. This is H2 settings on the 1Dx2 and if I’m not mistaken, H0.7 on the D5. Extreme blurring in the 1Dx2 and slightly sharper on the D5. Both has the same amount of non-viewable details but I’m still baffled by the sharpening artefacts in the RAW file. 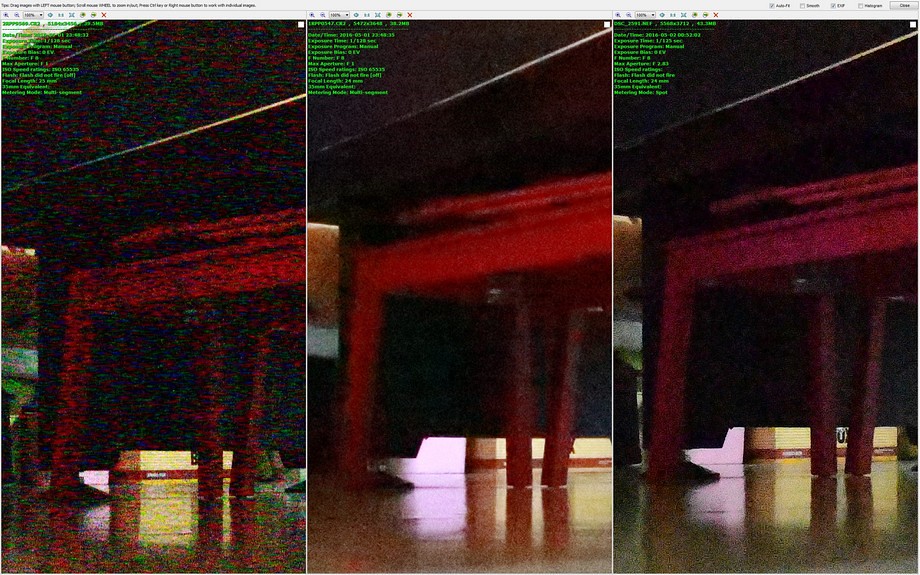 (High res image click Here) – ISO205000. D5 has a clear edge here as you can still see the outline of the bench under the table. The 1Dx2 image has already been turned into a fuzzy fur ball with the edges smudging and blurring. 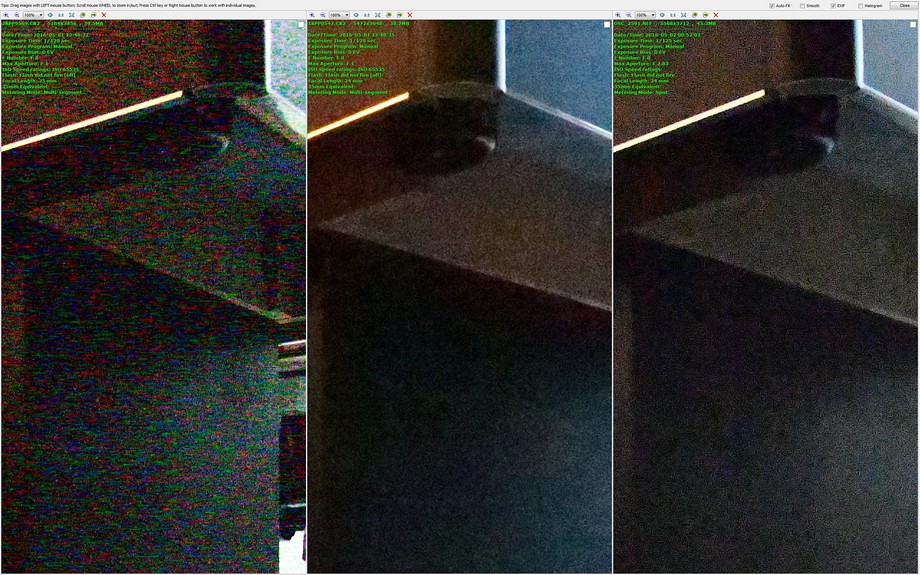 (High res image click Here) – ISO205000. D5 has the edge here with the image looking sharper. However I would prefer if it didn’t have the artefact lookalike. 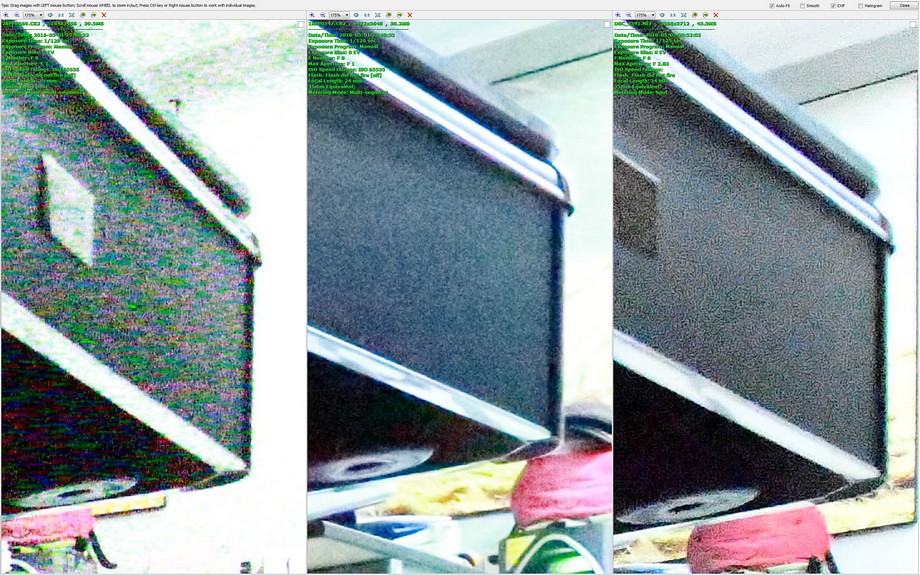 (High res image click Here) – ISO205000. Similar to the above. D5 has the sharpness advantage here. 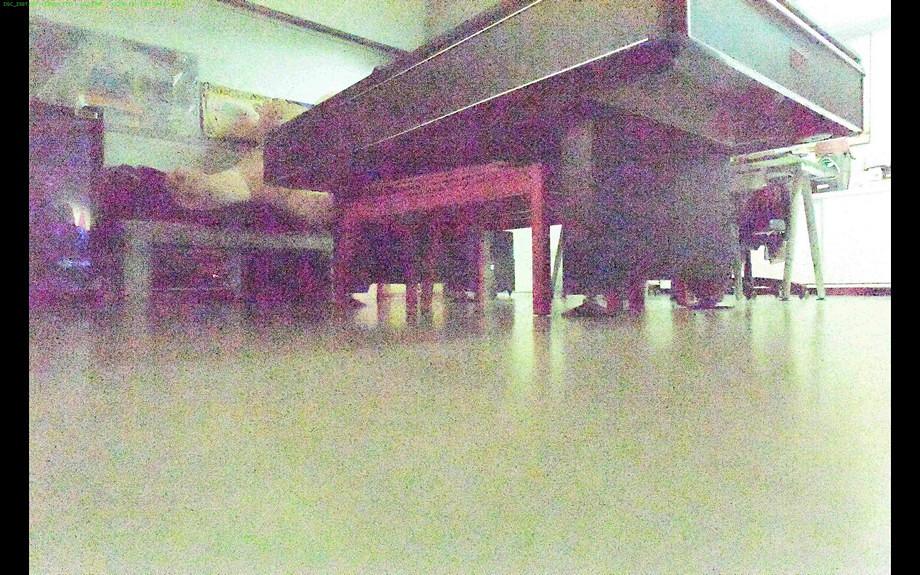 (High res image click Here) – And how can we not end this with the D5 shooting at ISO 3million? This is the image straight out of the camera with the D5 at ISO 3million. Totally looks like Instagram filter gone wrong but maybe for forensic studies it could still be usable. It is also amazing that at such low light conditions, my exposure reading were F8 at 1/500 seconds. Hahaha!!

So in conclusion, both cameras does have its pros and cons and it will largely depend on what your job scope is, what kind of subjects you shoot most of the time, what ISO settings you frequently use. If high ISO above 25600 is what you always gun for, the D5 is likely a good match for you. Anything below ISO 25600, I feel with the added dynamic range that you can recover at ISO100 with the 1Dx2, it seems to be a better match for me. Of cos there are also other reasons like the battery life for the 1Dx2 is only capable for about 1500 shots while the D5 can last you about 3500 shots which makes a lot of difference if you are away on a long trip without charging capabilities, there’s built in GPS for the 1Dx2 and none for the D5, 1Dx2 uses CF & Cfast2.0 cards while the D5 uses CF & XQD cards. Both cameras have pretty spot on auto white balance with the 1Dx2 spotting AWB with white priority, making editing work a breeze now. Both cameras also feature the anti-flicker mode where you won’t get funny color cast when shooting above 1/250 in florescent lighting conditions. Both cameras also focus a lot better, faster and more accurately than ever before, hence there really are pros and cons in each system to be honest. Either way you won’t regret because there are vast improvements over the predecessors they replace.

Till the next time,
Raymond