Losing a part of yourself

Been ageeeeees since our last update. Raymond is always busy (I wanted to use the word usually, but decided always is more appropriate), so I’ll have to take care of this space here.

The month of June has been quite a roller coaster ride for Raymond, he was so occupied with work, meeting up with Photographers, attending Still Motion workshop organised by Canon Singapore, did a few rounds of location scouting for a conceptualised pre-wedding shoot because he wasn’t really satisfied with the location so he actually went to the same spot at different timings on different days, the office is in a huge mess because we didn’t have internet, whole office was undergoing massive rewiring due to a melting wire in our main DB circuit box, shoots… and finally one night on 12 June when he returned after meeting up with a photographer who came from overseas, he returned home with a tummy ache.

Usually when you have tummy ache, it’ll go away awhile, if not after pooing, or after taking some medication (charcoal pill, po chi pill and what not). For Raymond, the pain didn’t go away despite taking medication and rubbing some medicated oil on his tummy. The pain caused him to lose precious sleep, he was practically rolling in bed the entire night. So the next morning on 13 June, I had to force him to see a doctor first thing in the morning, the doctor examined him and concluded that it’s food poisoning, probably because Raymond said he had some crayfish (but the other photographers who ate the same food were ok). So doctor gave him a jab to stop the pain (which didn’t help at all, but Raymond developed a fever shortly after), and some medication for pain. 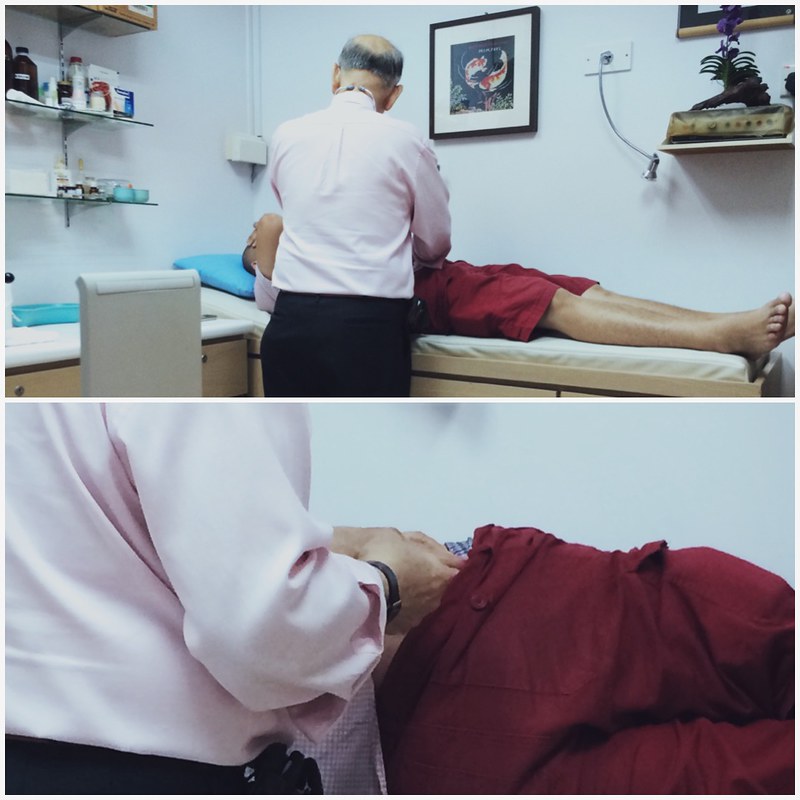 Raymond had some oatmeal, took some medication which caused drowsiness and the stubborn mule was trying very hard to fight the drowsiness so that he could finish his editing. So again, I had to force him to get some rest, and thankfully he slept through the day, but sadly missed Jason and Shan who flew back from Australia to meet up with us. After meet up, I checked in on Raymond and his first question was what time is it? Are we late for dinner appointment with Amanda? I told him he’s too weak to go anywhere or eat anything since he’s still moaning in pain… but he insisted, and I had to tell him that Amanda has already made up her mind to postpone the appointment till he’s better. 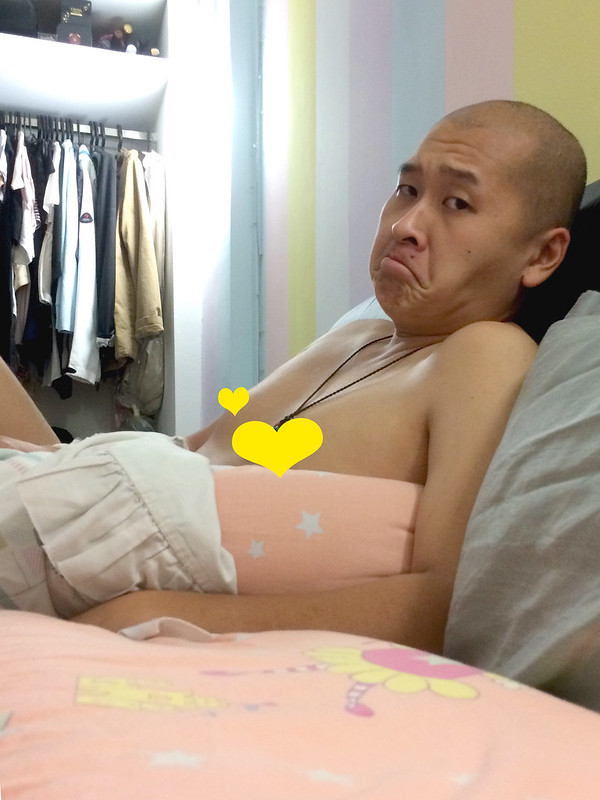 This was taken on 14 June, at almost 1am when I woke him up for medication. Still painful, but trying to act tough infront of my camera cos I told him I’m gonna take a picture and send it to his sister so that she can scold him and drag him to hospital or something cos he was still in a lot of pain which he have never experienced before. 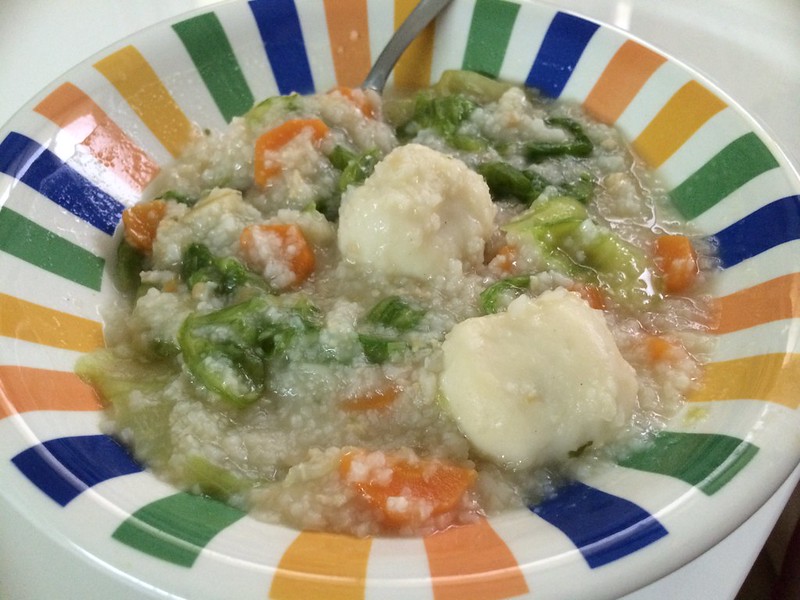 His dinner/supper. Some porridge with boiled veggies, carrot, and fuzhou fishball. He didn’t have any appetite and I thought all veggies would be too boring, hence the bonus fishball with meat inside.

For the past few nights, I also couldn’t sleep well cos every nudge or twitch he made would wake me up and I was in fact on 24/7 standby, ready to fly him down to hospital if he says yes… But stubborn mule insisted it’s ok despite moaning and groaning…

Morning, we even went out for appointment with the family, he even DROVE… so as you can see, this fella has a very high tolerance for pain. Made it back in time to meet SiYing, whom we were due to photograph her conceptualised pre-wedding on 23 June and 28 June… I told her Raymond is still not feeling well, SiYing did some examination for Raymond, and insisted that he go to the hospital immediately. Stubborn mule wanted to finish the concept pre-wed discussion first before making a decision, but thankfully SiYing was firm in saying NO, so ended up we packed our bags (Raymond even asked me to pack his laptop) and went down to SGH. 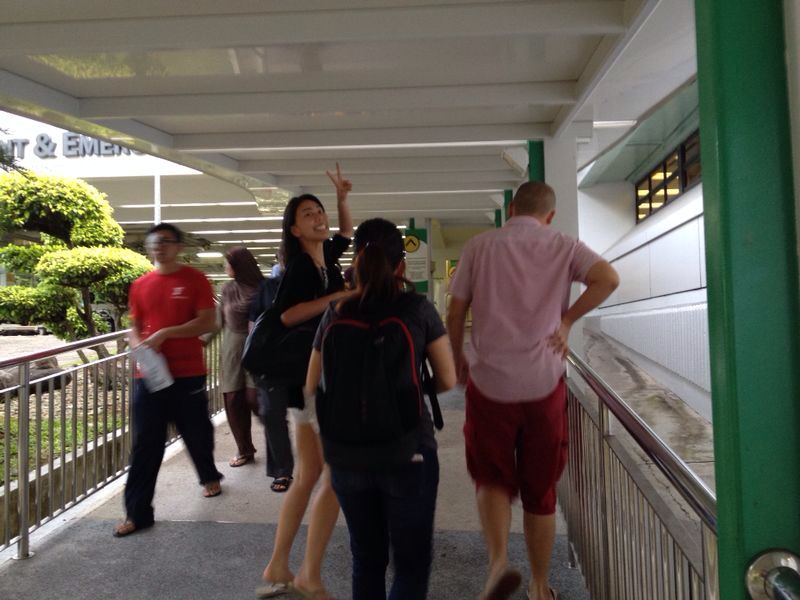 Here’s a snapshot of SiYing, me carrying Raymond’s laptop bag, and Raymond walking and holding onto his painful side. 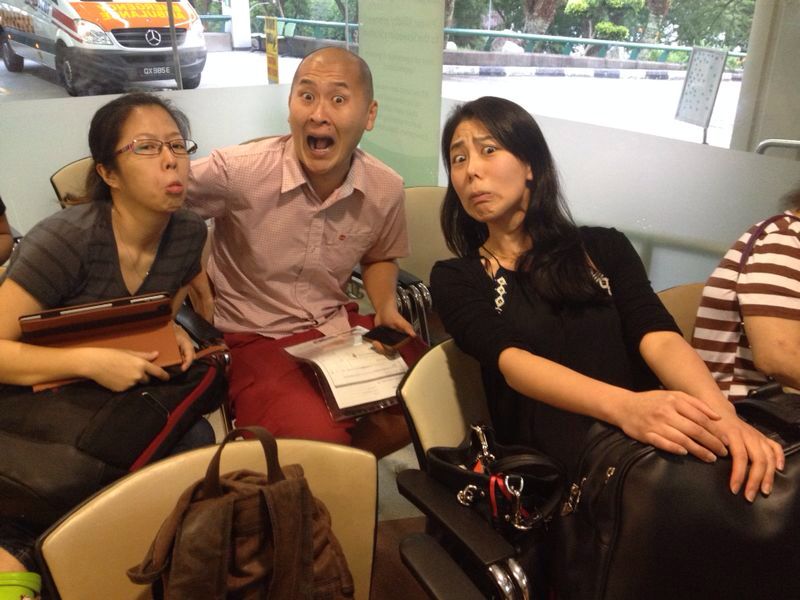 After we registered, we had to wait. So all sit down and try to discuss a bit for the concept pre-wed shoot.

Thankfully SiYing accompanied and helped us throughout the entire process, if not we’d probably have to wait till cows come home. She’s like the superduperwonderwoman!!!! You know she actually could have postponed the meet up to another day, happily collect her claypot rice which she ordered (and didn’t collect cos we were rushing to hospital), enjoy her dinner and have a good rest cos she haven’t been sleeping for days already due to work………………. But she chose otherwise. Super touched and grateful lah.

I’m gonna skip the scans and tests that Raymond had to go through before being admitted, but by time we were done it’s already past midnight. 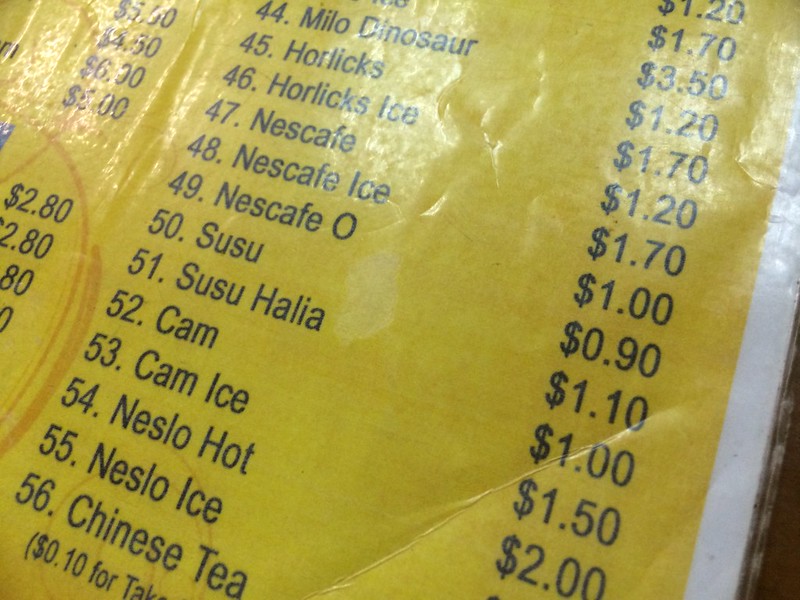 The hungry peeps went for dinner/supper near the hospital, and I snapped this picture for Susu cos her name is on it.

Reached home at almost 1.30am, and SiYing had to sleep in the hospital cos it’s too late for her to go back and she scared will wake the Flash up. 🙁 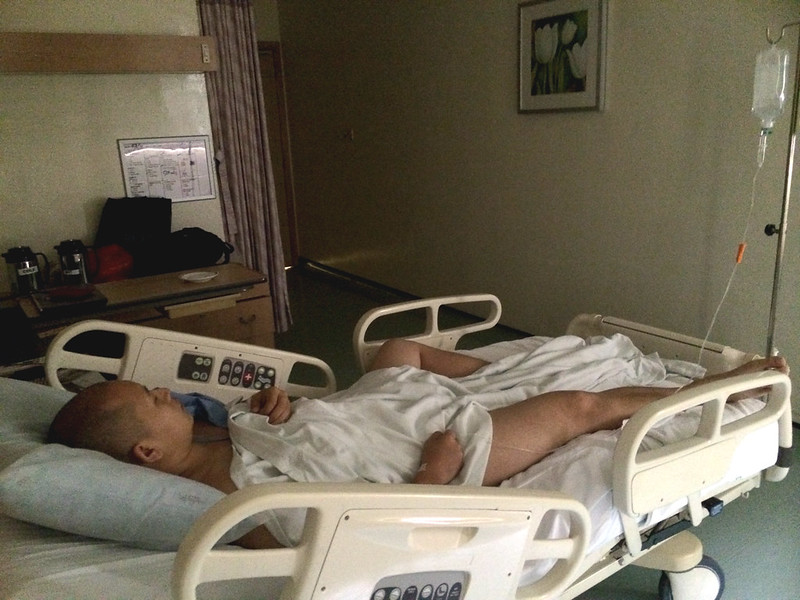 This is Raymond who just finished his operation on 15 June… the anesthetic effect hasn’t worn off yet when I was there, so he’s constantly sleeping and frowning. You can’t really have a proper conversation with him cos you’ll very much prefer for him to rest. 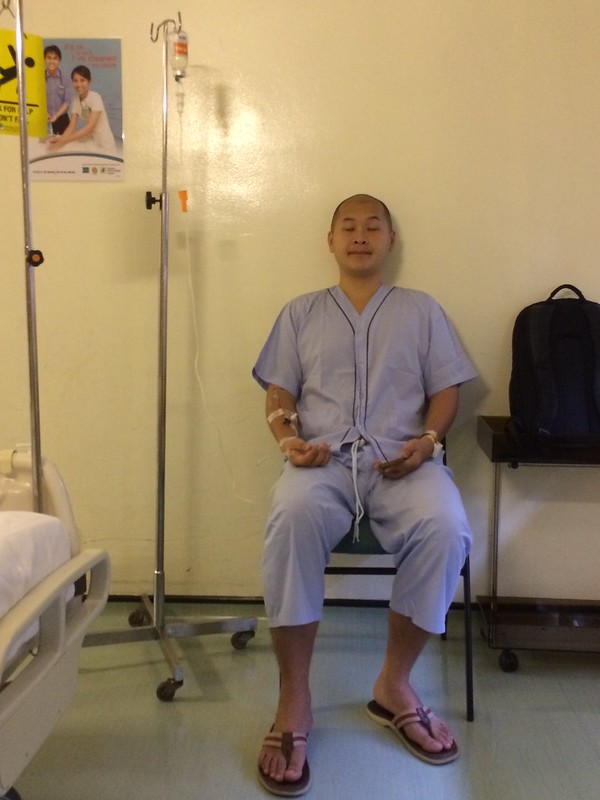 This is Raymond on 16 June who tried to smile for the camera. I was telling him it’s better for him to sit up, walk around if possible cos it helps in recovery. Plus he was vomitting, his whole back and shoulder was aching cos of the bed. 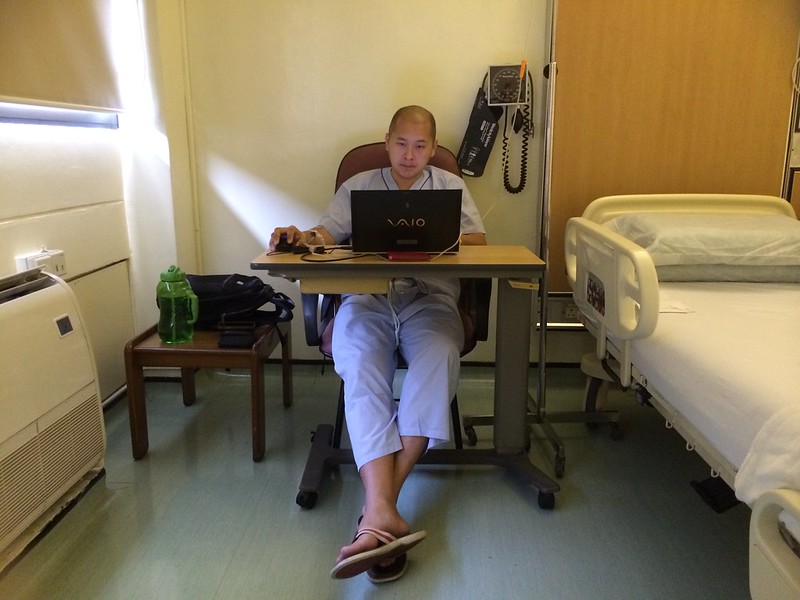 Ended up he couldn’t take it anymore, decided to switch place with me and asked me to roll the desk over with his laptop. He wanted to finish up as much work as he can cos we have some clients chasing him for photos despite being informed that Raymond is in the hospital and just had a surgery….. 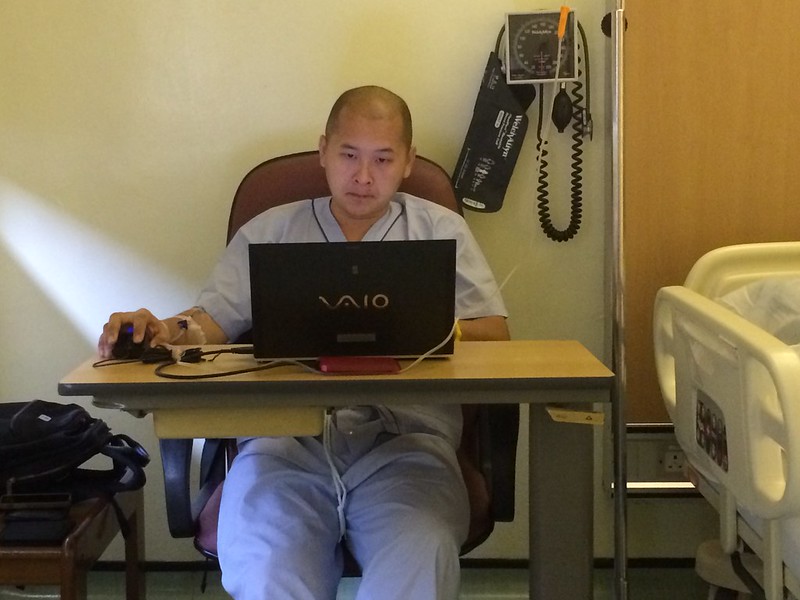 I had to ask the nurse for a few vomit bags for Raymond, cos even when sitting up he was still puking. He can’t take too much water, have to be on the drip for glucose and medication. Medication made him sleepy again and this was morning at about 9+am.

While he’s working, I was walking around the room tidying up the table cos there were newspapers, some water and basket of tonics on table etc when at the corner of my eye I saw him nodding his head. I turned around only to realise that he’s actually dozing off… So I quickly squat down and took a video of him.

It’s very heartpain to see him not resting even when he’s already hospitalised, still vomitting, still in pain, and just had a surgery the day before. I don’t know whether this is called stupid don’t want health, or passion or persistence or what in delivering to clients…. Can somebody just talk some sense into him? 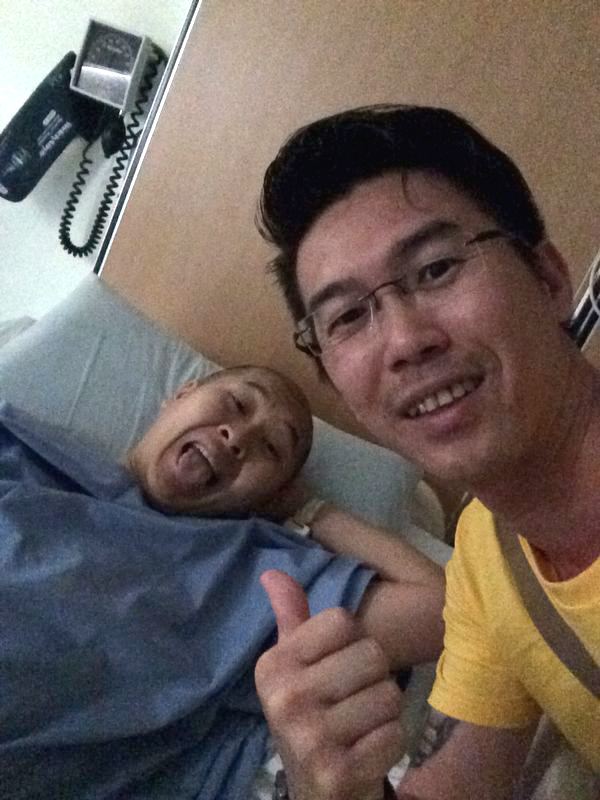 Here’s Mr KickAss Tactical paying Raymond a visit. A few friends also came to visit him, and brought him truckloads of Chicken essence. He’s still trying to finish them now even as of today. Hahaha! 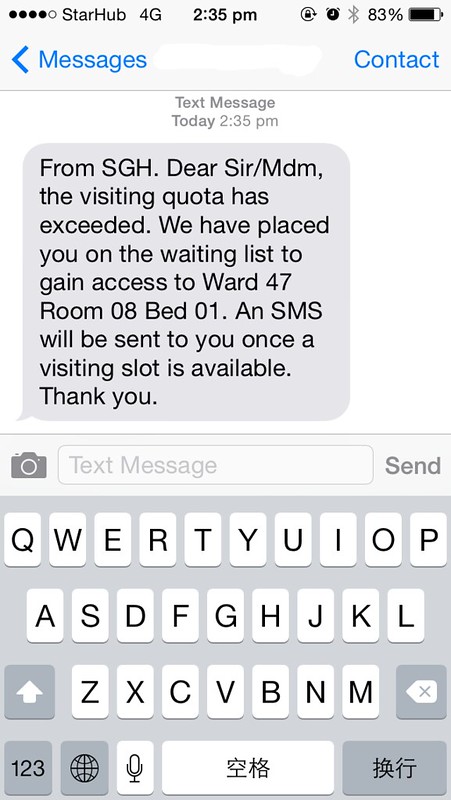 A message I received on my phone from SGH. Couldn’t go up to visit cos SGH has this quota on the number of visitors allowed. 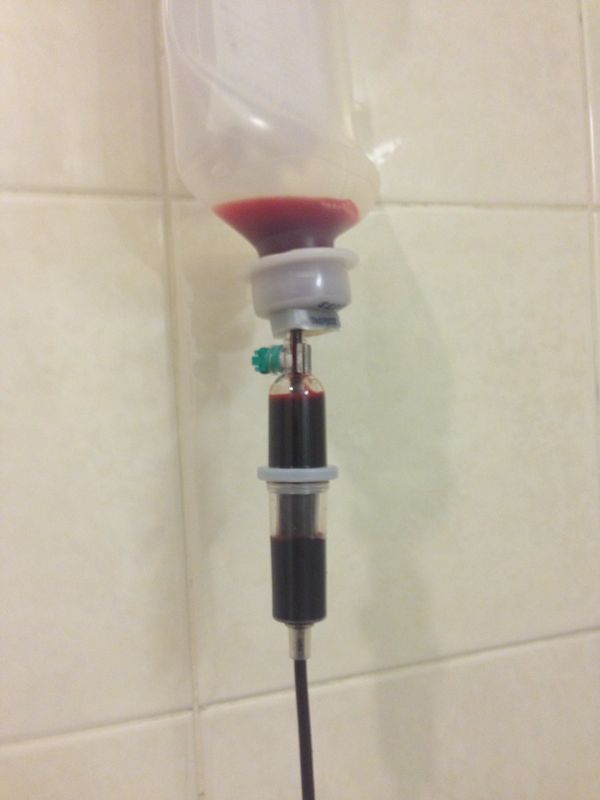 Raymond sent me this photo he took while he was showering. His blood got sucked back into the bag of drip. LOL! 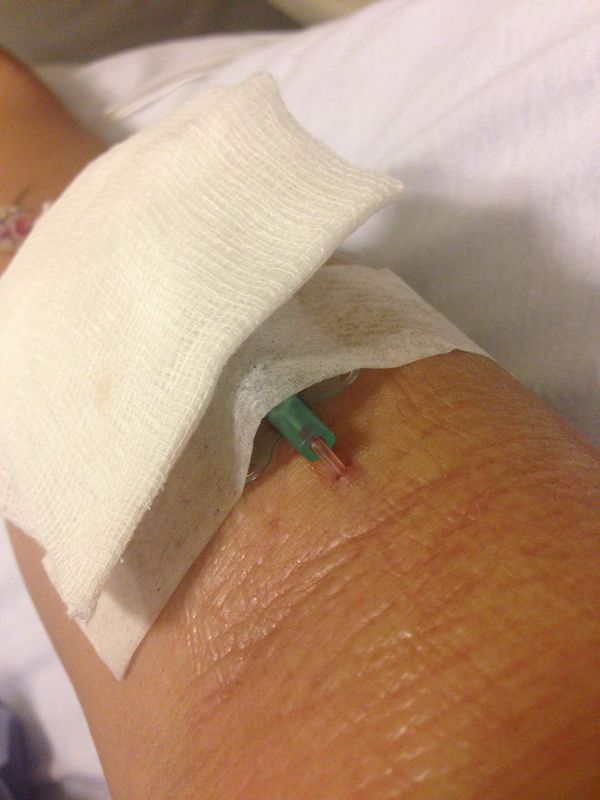 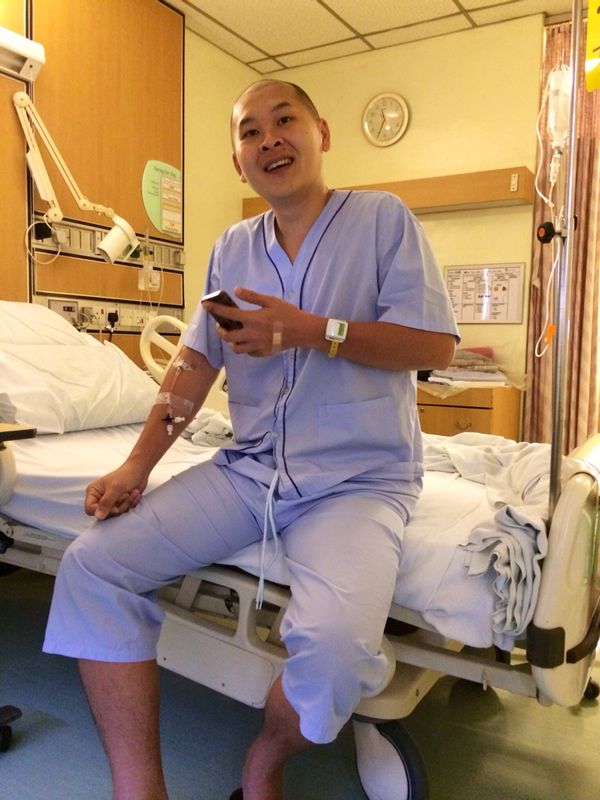 That’s him feeling better already, photo taken by Mr Kentaro. We were excitedly talking about his new car and hello kitty stickers. LOL!! 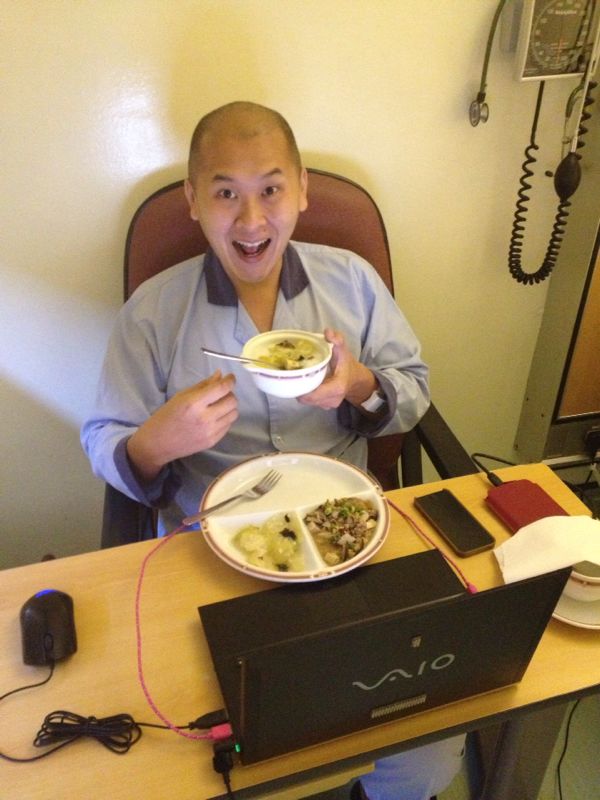 So much better already, can remove drip and finally can eat semi solid food! But still on the laptop. 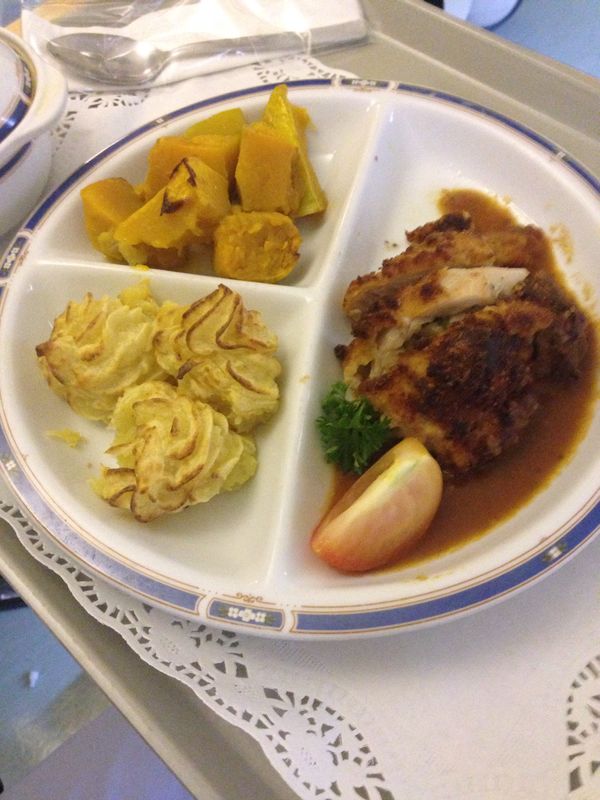 Not sure what is this, but I think that’s eeky pumpkin. 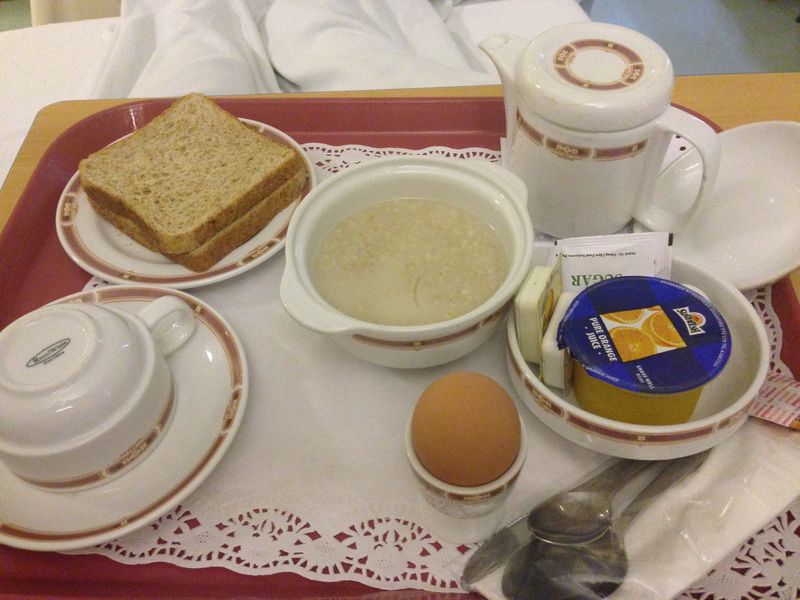 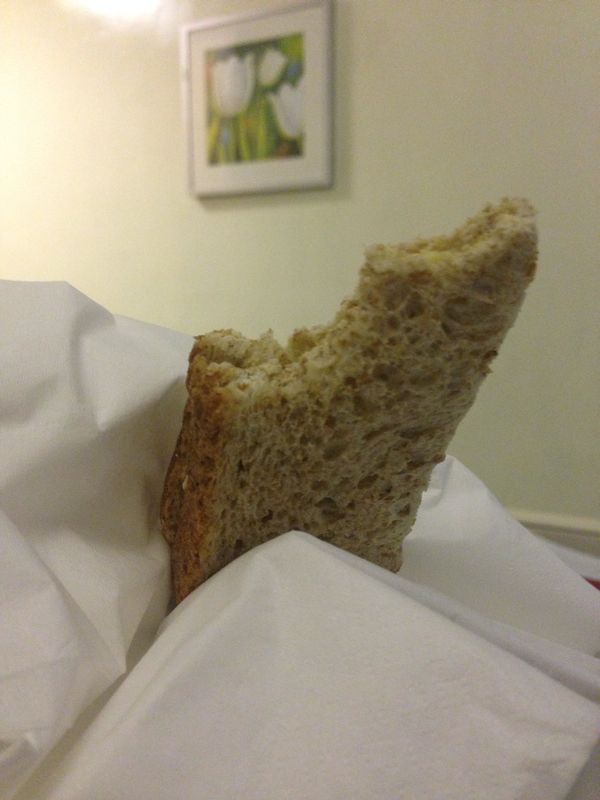 Whatever happened to his french toast he says. 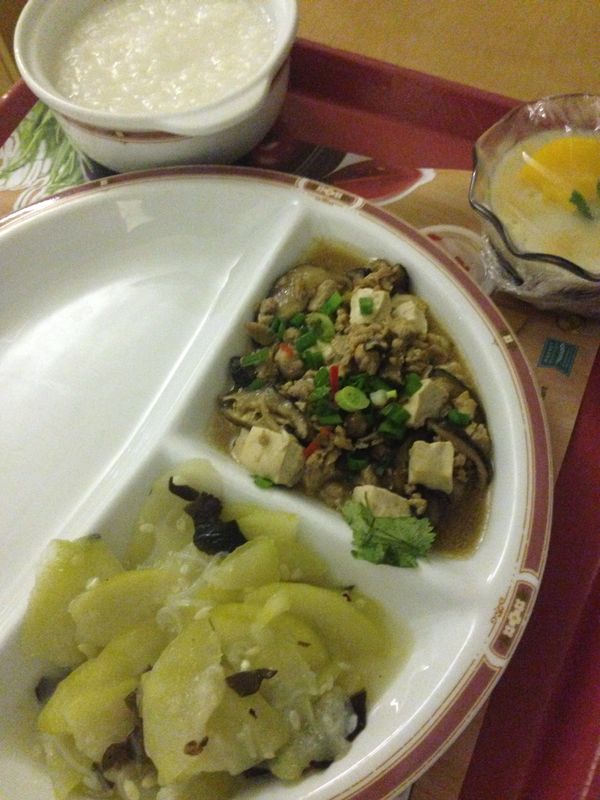 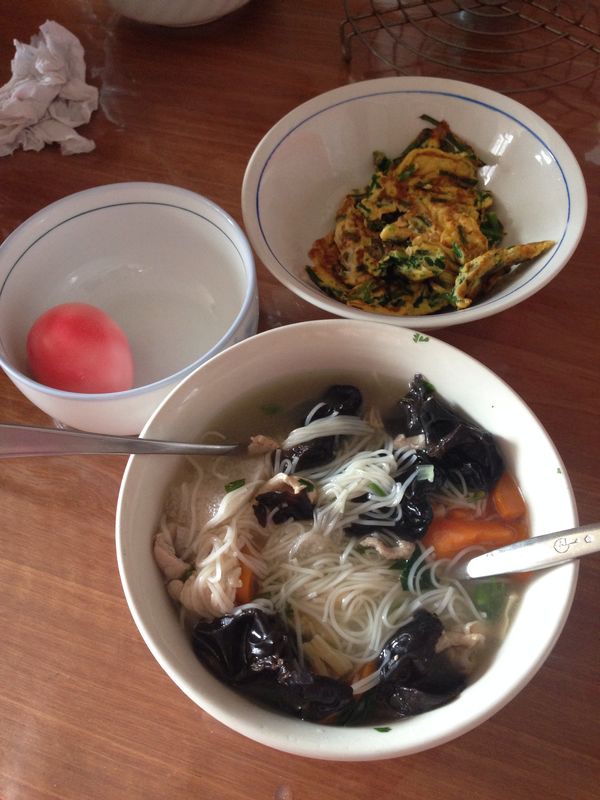 He finally got discharged on 18 June, and this is the first meal he ate at home, cooked by his mum.

I don’t want to go too much into detail for this post, but I would just like our friends to know that we appreciate all your care and concern for Raymond during this period. Especially to superduperwonderwoman, if not for you, things would have gotten much worse.

Alrighty everyone, have a great weekend and here’s to good health!