Dear empty space, sorry for neglecting you just like how I neglected many aspects of life. But… here I am! Filling your ears with stories and updating you with some of the happenings!

Lots of nitty gritties – Bailey crossed the rainbow bridge (did i share this with you already?), we went on to New Zealand, Zurich, then to Hong Kong and back in Singapore, I gained 3 KG from the 3 different countries, Mini boss had hyperpyrexia, the ad campaign we did for Singapore Kindness Movement (Ben and Bang) was launched when we were away. We have been extremely busy since we returned, so it was only recently that we managed to squeeze some time out to hunt for the prints. Susu and I are gonna be jie meis for Anna and Sherman’s coming wedding next week! I hope the gatecrashing will be an interesting, fun and enjoyable tekan session for Anna’s friends and family.. hopefully not too much of a culture shock. We promise we’ll go easy… but it’s not easy on us too! 5-6 sisters against 15 brothers plus the groom. They have too many sneaky and cunning brothers in their team so hopefully our few but lethal games will have them begging for our mercies. MUWAHAHAHAHA!!

Thing is, the weight gained didnt help in our dress fitting. They got a pretty pink one piece dress for the sisters, but if i were to put anything, siew mai or a slice of cake into my mouth, the dress is gonna burst into a million pieces. I don’t think anyone would like to see pink confettis and a blob of fatty jelly running for life. SO, we’re gonna hunt for alternatives this weekend. Wish us luck! Hahaha~

So, so, so, so, we were talking about the ad campaign photoshoot right? Here are the photos!!! 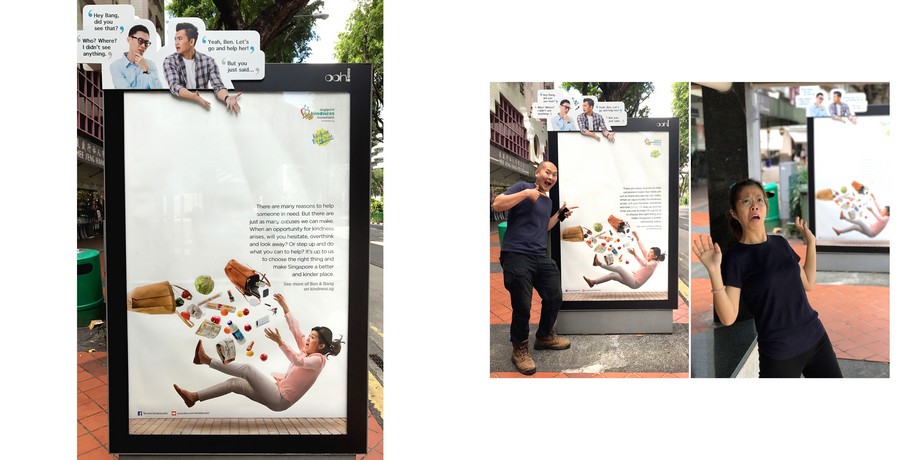 Spotted one at bus stop! Had to take a photo! Ray’s mandatory shot and Angeline’s failed falling shot. Kelly obviously did a much better job! 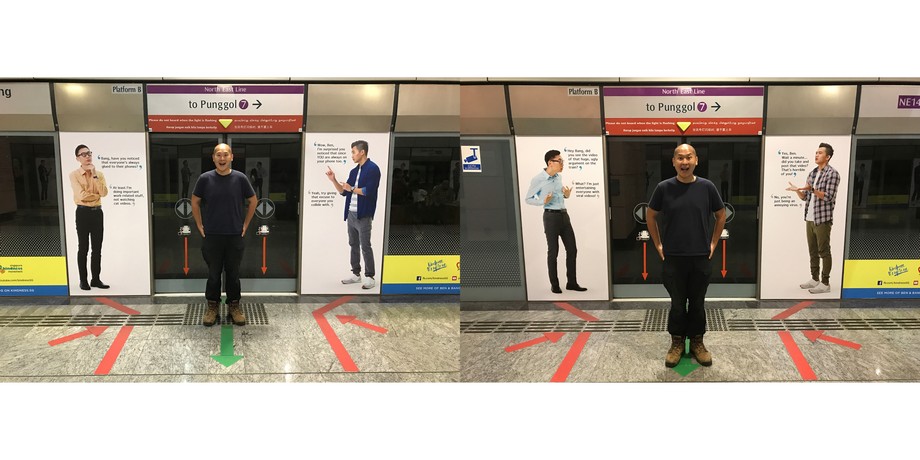 Next, we brought along our trusty EZ-Link card and headed down to Hougang MRT Station! Ta-Dah!! They’re all over the station! 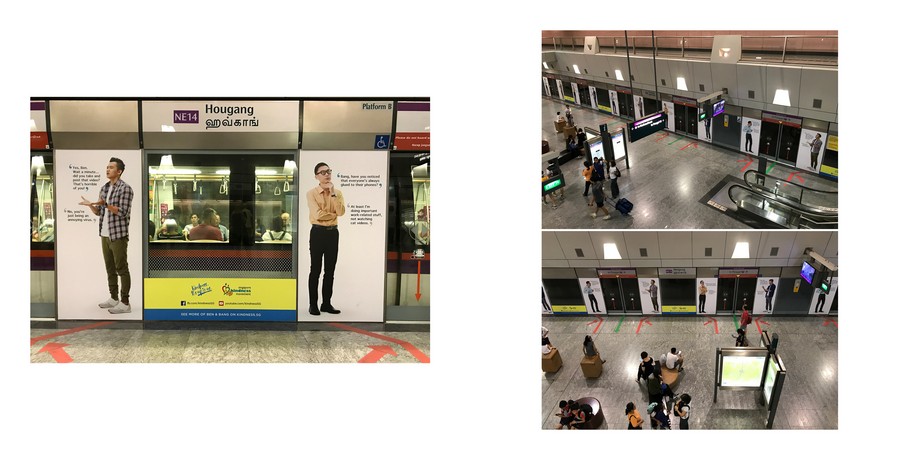 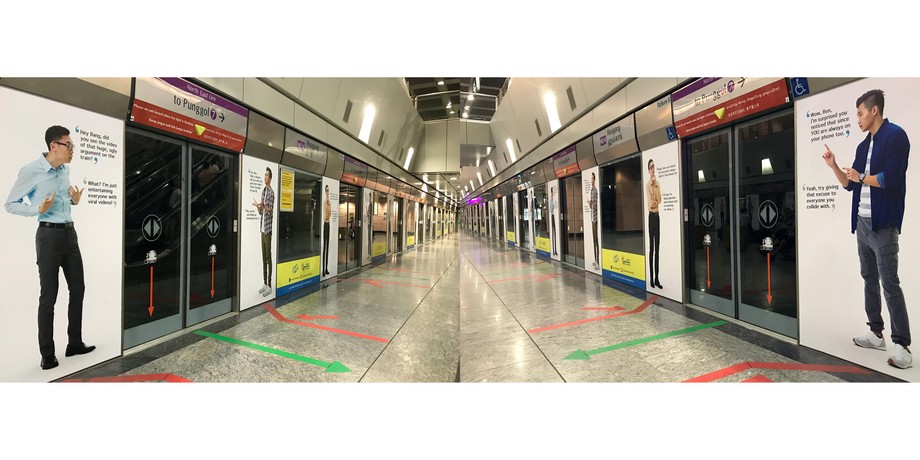 The photoshoot was super duper fun (as with almost all of RPP’s photoshoots). We’ve had friends in the industry sharing about how some talent/model’s attitude are smellier than Prahok (sorry to my Cambodian friends, I know some of you really love this dish but it’s an acquired taste for me. :P). So we’re extremely grateful to have this group of people working together with us – fun, positive, vibrant, humble, accommodating and all things sugary!! They brought us so much laughter on set! Thank you for letting us enjoy what we’ve always loved doing! 😀 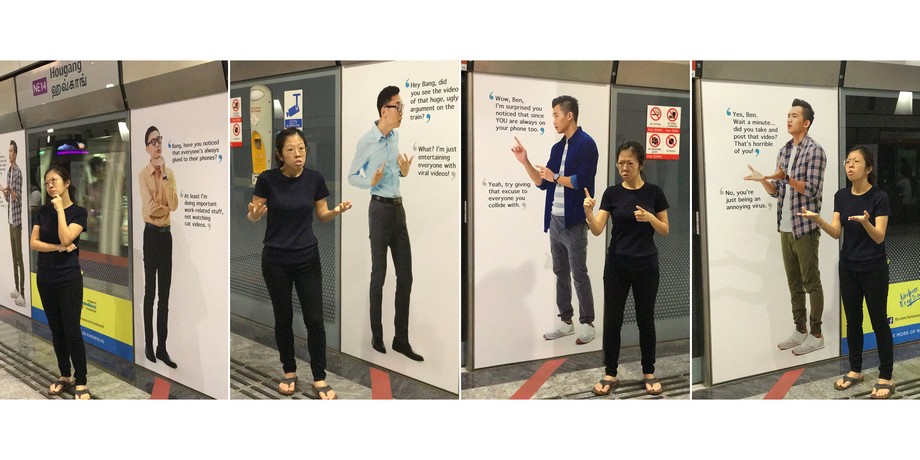 If you think it’s easy being an actor/talent, think again. Here’s Angie’s failed casting for the Ben and Bang role. Christopher and Imam clearly were the winner with the expressions. Angie just look like she’s…. haggling price with the granny underwear seller at the wet market. -_-“ 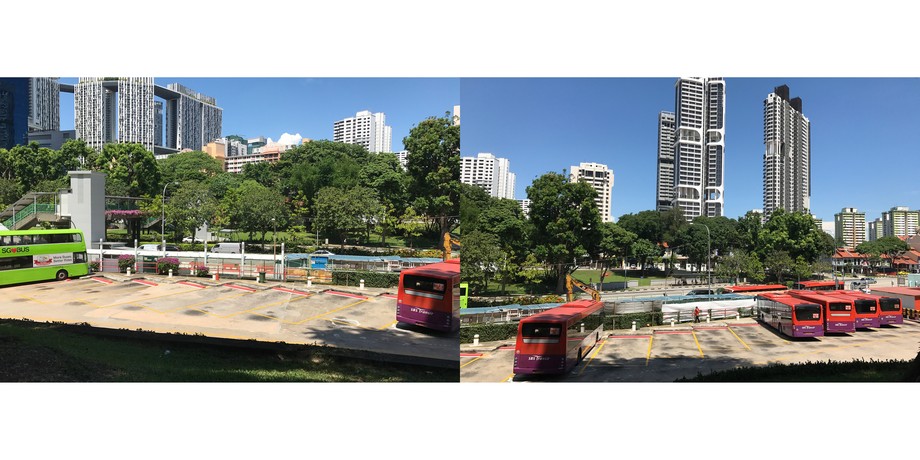 Next was the toughest one. Buses. -.-“. We went to a few bus interchange to hunt! Ended up eating a lot of junk food also cos of that. Imagined just one bus interchange and Angie had 3 slices of cake – Lychee Martini, Black forest and some Sea Salt Caramel from The Pine Garden. Now someone please tell Angie why her dress is exploding.

We waited damn long, asked the bus captains but no luck. Finally J gave us some bus numbers to try and here we are at the North Bridge Road Bus Terminal trying to use our Karma points. It was quite a burning hot day, and the summon uncle was lurking around like hungry shark. $1.20 per half hour was the rate for the parking… you don’t want to know how many coupons we teared. 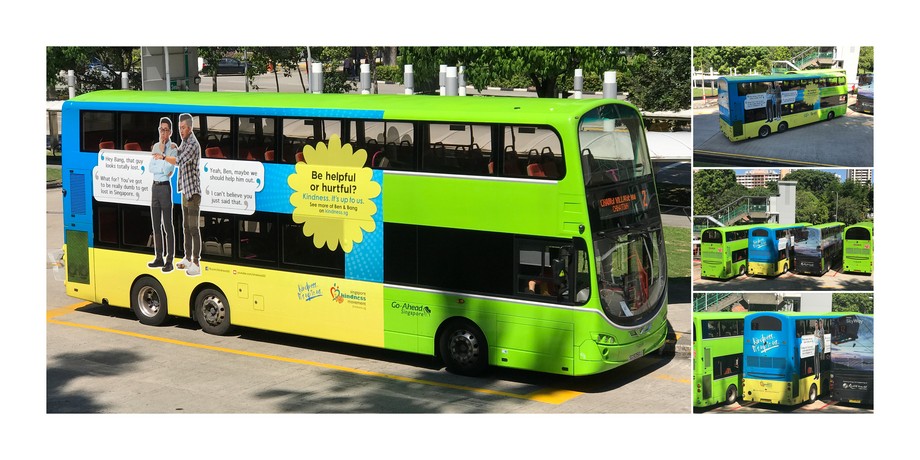 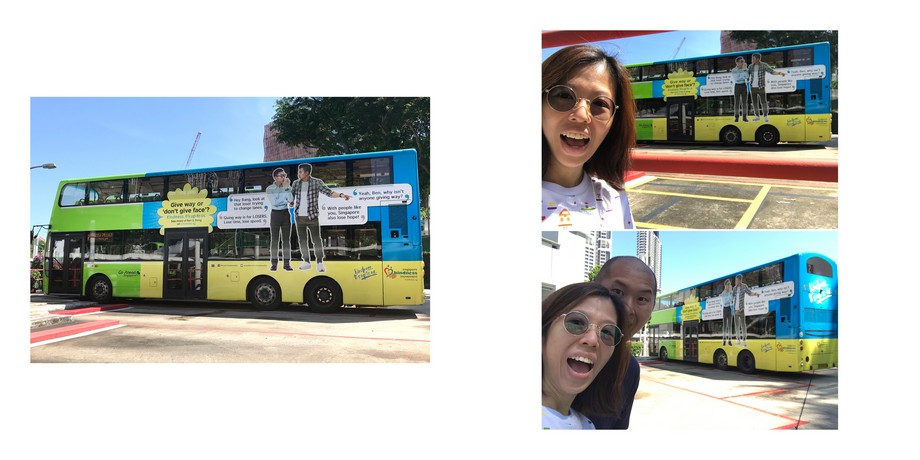 Wah, fasterly we ran down and take photo like mountain turtle tourist! Those who have seen us running must have thought we were mad people who have never seen a bus before in their lives. Well, it’s exciting to see your work appear on buses mah… Raymond wanted to go up close to scrutinize the prints but surveillance camera were everywhere and we’re not allowed to set foot on the bus bay, so we could only admire it from a distance. 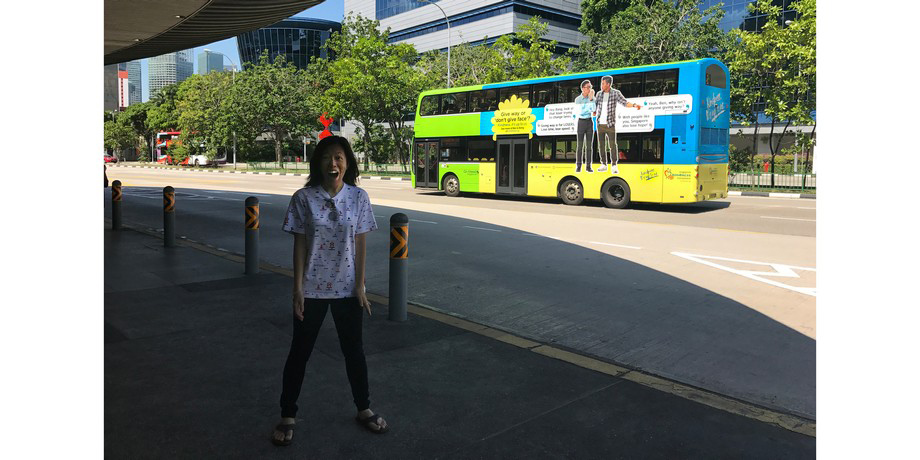 Just when we thought we might have a chance of taking an up close photo, the bus flew straight ahead without stopping at the bus stop where Angie was standing. Grrrrrrrrr…. So Angie quickly stood and froze while Raymond took a few shots with Angie’s iPhone. Sadly Angie almost camouflaged together with the road cos she was standing in the shade, but oh well, at least we can see the bus! Weeeeeee!!

We were super relieved that we can finally close the bus hunting chapter and move on to focus on the work we have on hand. Lots of through and fro communications, lots of liaising, lots of challenges with tripping stones, heads becoming 40 times bigger, white hair count increased by 100 folds. But we’re thankful for the opportunity and experience, it’s a test to see how far we can go in terms of our capability, how much strength and endurance we have to push this through, how much faith we have to make things happen. I’m sure we can do a swee swee job as always! Let’s see what magic we can create this time round. But first, let us stock up on the chocolates. Muwahahahahaha~

See ya around next time! 😀