Over the weekend he was allowed to book out, so after he was done with his work which was already 7pm when he got back, we took Mini boss out for a stroll.

I got this tricycle for her few months back, and she love riding on the tricycle (actually more of sitting and us pushing). I was contemplating which brand to get, and once i’ve decided on the brand, I had to think hard on which model should I be getting. It’s just one tricycle, but I used up quite a lot of my brain cells cos there’s just too many brands, too many different models, and worse thing is, their prices are all thereabouts similar. -_____-”

Initially I wanted the radio flyer brand, and since our space is already very cluttered, i wanted something that is foldable so that i can just keep it somewhere without taking up too much space. But unfortunately Singapore doesn’t carry their foldable model, and the non foldable ones doesn’t have a dedicated foot rest. So i gave up on radio flyer. Will probably look into that next time when she’s bigger.

So after checking with my Mother-in-Law on her requirements, here are the criterias that I need to look for in a tricycle;

I saw the iimo Tricycle and wanted to get that cos the seats looked quite comfy, and I like the minimalistic design of it. Mini boss enjoyed pressing on the “horn” thingy anyway, and it is foldable! She had a lot of fun in it when we first saw the iimo tricycle at John Little Plaza Singapura before it closed down. Ended up if I really got that tricycle, I had to top up to get the umbrella and adapter separately on my own. With the umbrella on, i cannot see her at all. So… unwillingly dropped the idea.

Then I was deciding between Smart Trike and Little Tikes. Was a long struggle before i decided on the Little Tike’s 5-in-1 Deluxe Ride & Relax Recliner Trike. I got it off Lazada for $205 then. If you want to get the tricycles, try baby fair. Sometimes they have good deals!! The one at Suntec in February had quite a lot of tricycles on sale. I didn’t really go for that one, and usually I’ll go the Mummy’s Market at EXPO. Wait for the pre-order deals to launch, grab them, then go the fair to collect pre-orders and see if we missed out on anything.

So here’s Enen enjoying her ride; 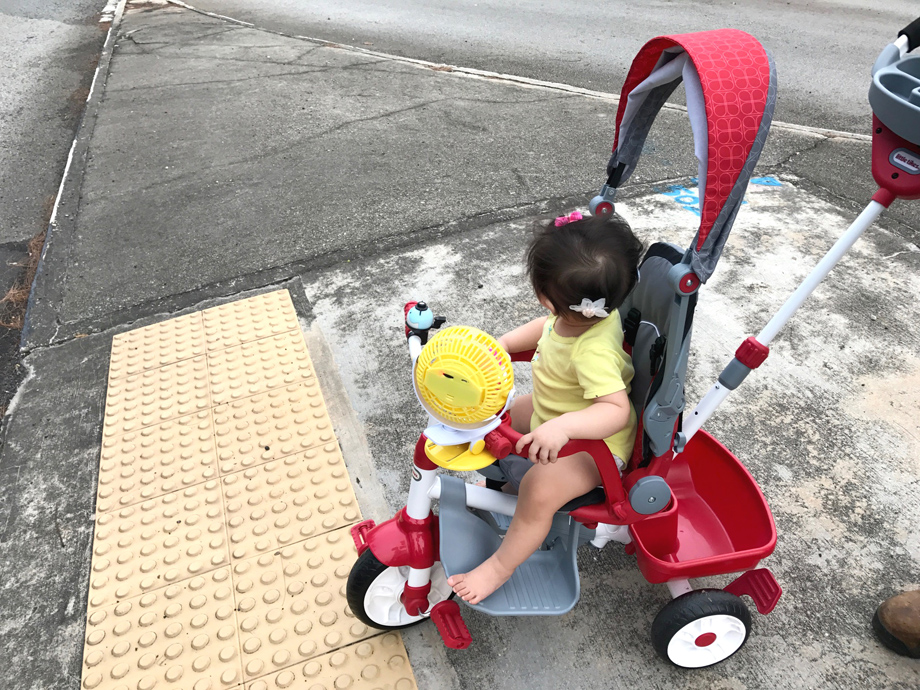 Looking out for traffic before we cross the road. Enen’s tricycle is zhng-ed with a yellow fan, and a blue color cutesy bicycle bell (which is mine!). Clipped up her hair cos she’s having heat rashes on her neck. Erm… no shoes… Ooops! 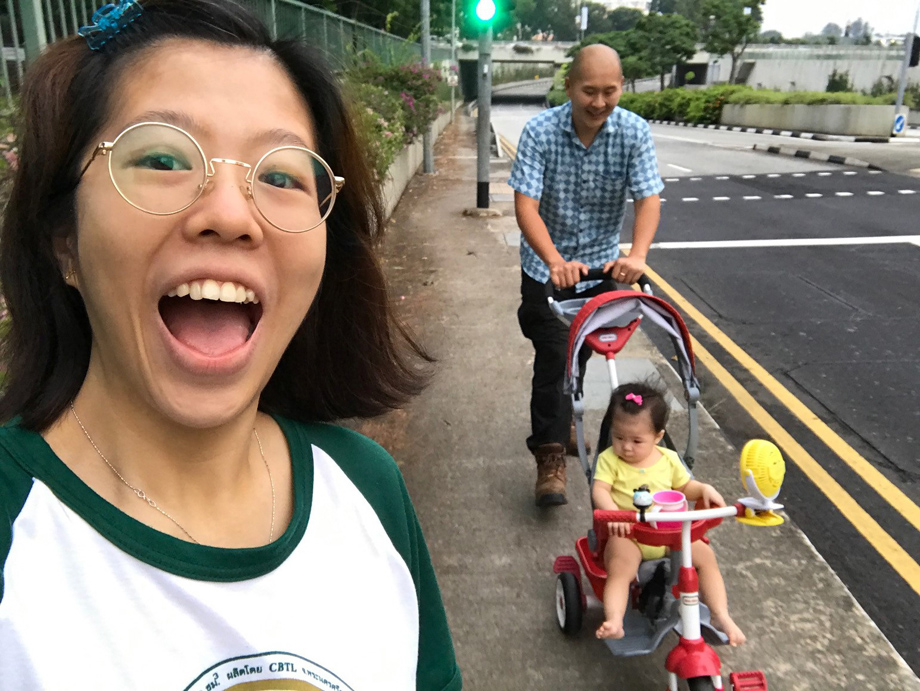 Lesson of the day – the one who takes the selfie standing at the corner will always look the fattest. -_-” 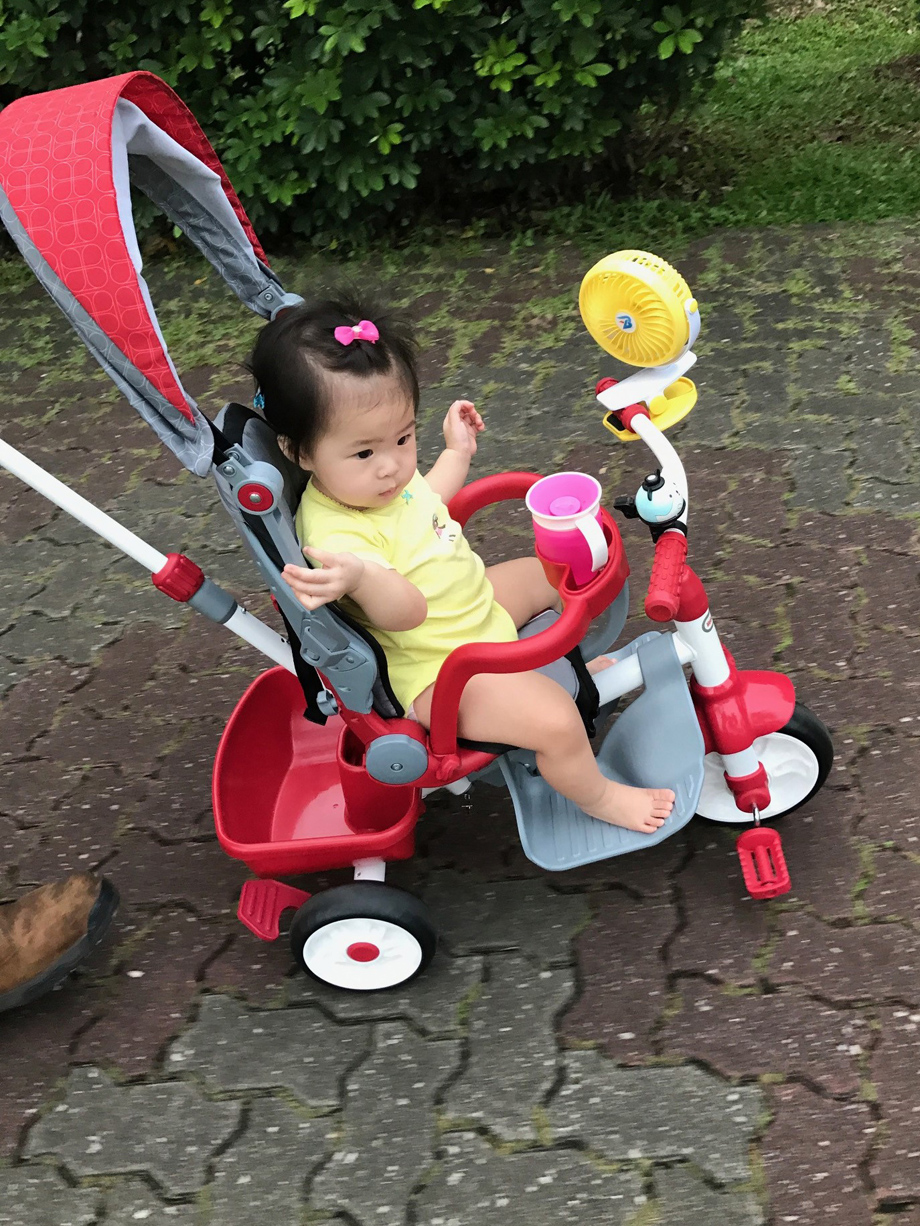 Mini boss slowly enjoying the scenery. Her seatbelt wasn’t on because… so far she’s ok without it. The safety bar thing is an added bonus. It comes with 3 compartments – one for her pink color Munchkin 360 drinking cup, the other two mini compartment at its side to put snacks or what not. Look at the foot rest… LOL! 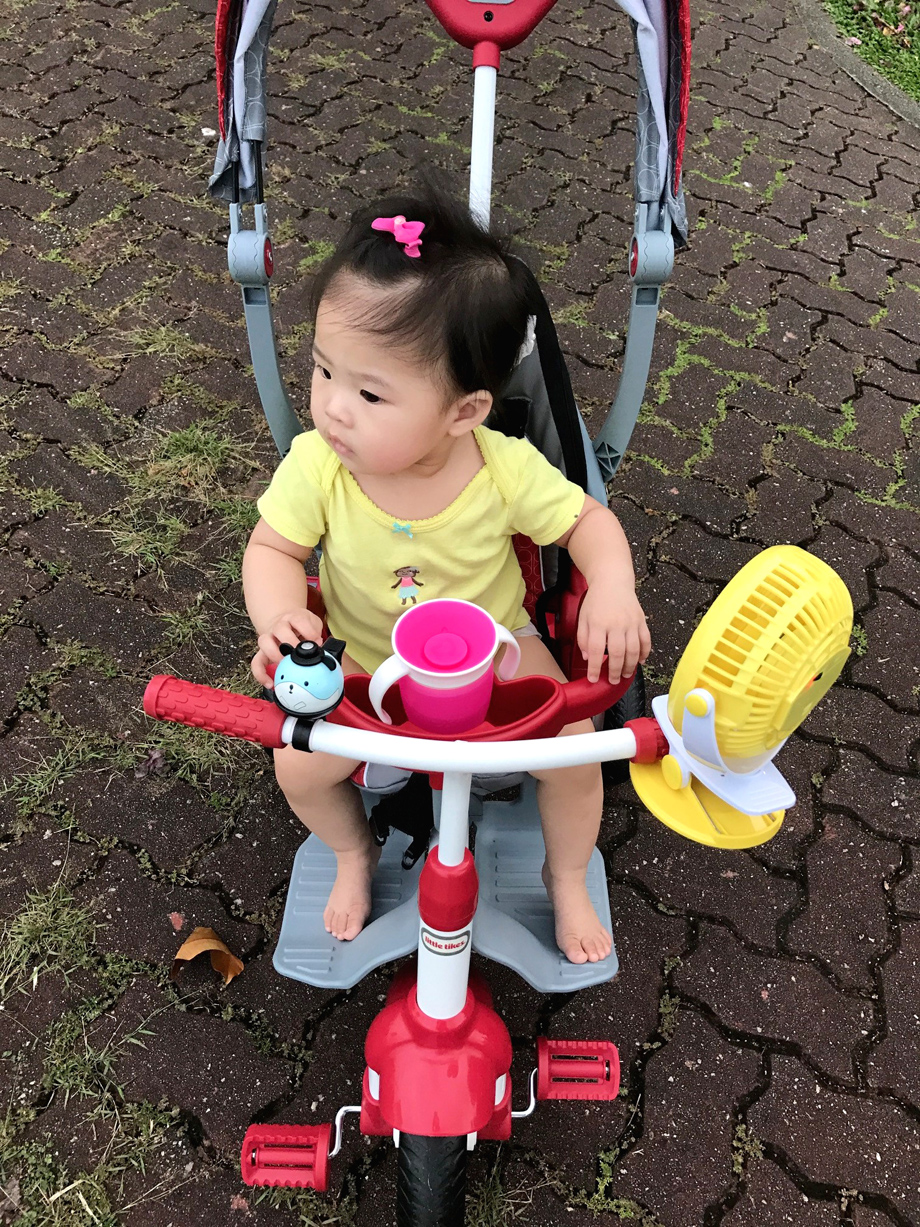 Ok now can see the bell clearer and the compartments. Canopy is high enough for us to see her while strolling. Time to time she’ll turn her head to make sure I’m still around, so it’s a good thing i got this. 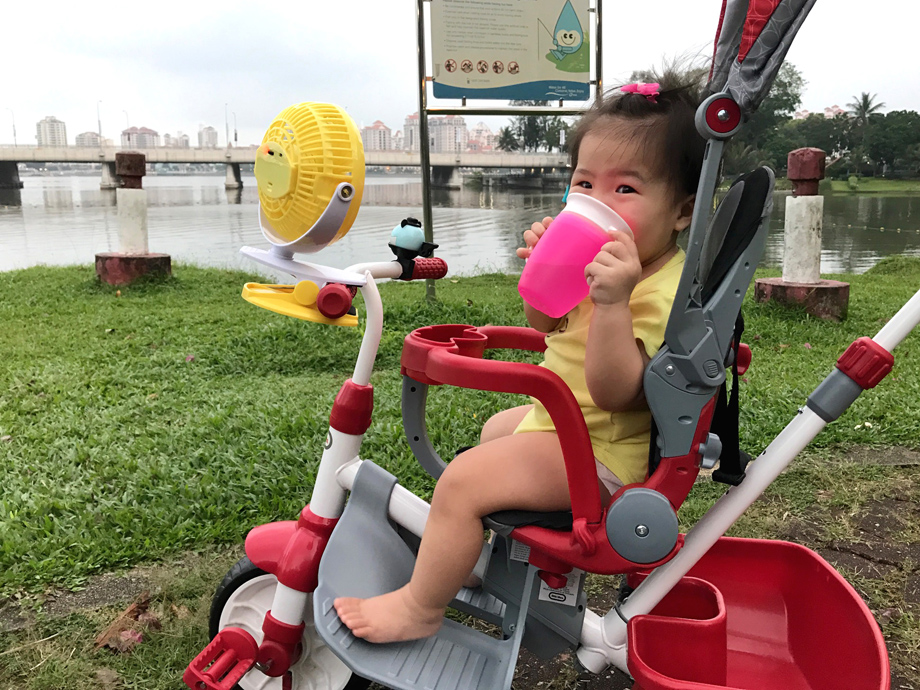 Stopping by the reservoir and taking a sip from her cup. The red basket is quite spacious to put your barangs. 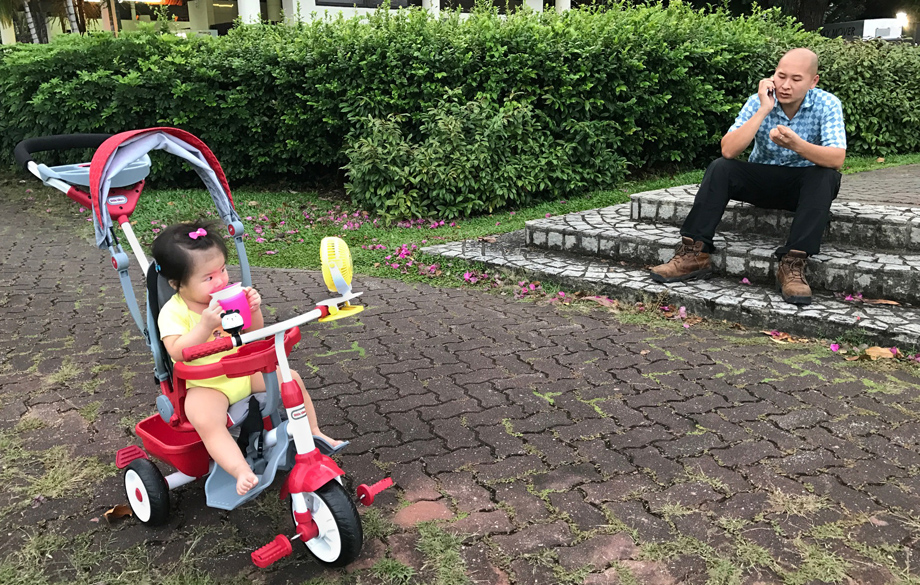 Here’s the overview of the tricycle. Mini boss taking a break, Big boss answering a call. Slave taking photo of the two bosses. -___-”

Oh forgot to add that there’s a compartmentalised tray at the handle where you can put your water bottle, iPhone, keys and what not. The handle is adjustable – 3 different heights to choose from. This is at its highest, for Raymond. He also commented that it seems a little hard to push the tricycle, cos you need to actually use a weeeeee bit of strength. So I told him it’s good mah, not like our bicycle got those ABS system, don’t need use much effort but can wheel damn fast. Otherwise if we’re going down the slope, Mini boss will just roll off the slope and crash very badly cos of the speed.

Overall we are pretty happy with the tricycle, just that we felt cheated it came in red color instead of the orange color shown in the photo. I think they really need to calibrate their monitor cos every screen i see, the photo of this tricycle is in orange… and people commented the same too – photo shown orange, product came red.

Also one grouse is the steering handle feels flimsy. Hmm.. I’m pretty ok with that cos so far so good for me lah. Cannot ask for more liao.

Alrighty, hope you had an enjoyable weekend too!

Till the next time!